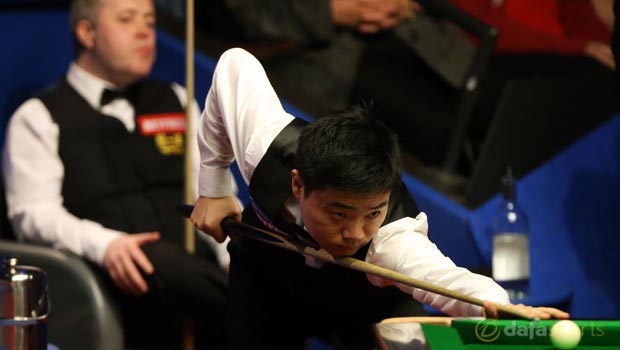 Ding Junhui is now “ready to win the world title”, according to four-time champion John Higgins.

Ding secured a 13-9 victory over Higgins in the second round to move through to the quarter-finals, having trailed 5-1 earlier in the match.

The Chinese star has been based in Sheffield for around 10 years but he has generally struggled at the Crucible Theatre, with his only semi-final appearance to date coming in 2011 when he lost to Judd Trump in an epic encounter.

The 28-year-old has won the UK Championship on two occasions and The Masters once, and Higgins feels this could well be the year that Ding completes a career ‘Triple Crown’.

“He reminds you of (six-time champion) Steve Davis in his prime, his cue-ball control,” said Higgins.

“He makes everything look ridiculously easy, and he made a couple of pressure clearances.

“I think it probably means he’s maybe ready to win the world title.”

Ding will face either Trump or Marco Fu in the last eight, with the pair set to begin their second round match on Sunday.

Trump is available at 1.22 to secure the win and move into the quarter-finals in Sheffield, while Fu is priced at 4.00 to come out on top.

Ali Carter and Neil Robertson continue their match on Sunday, with the Australian holding a 6-2 lead, and Ronnie O’Sullivan and Matthew Stevens are also in action.

O’Sullivan leads 5-3, despite initially falling two frames behind, but Stevens won the final frame of the first session to keep himself in contention.