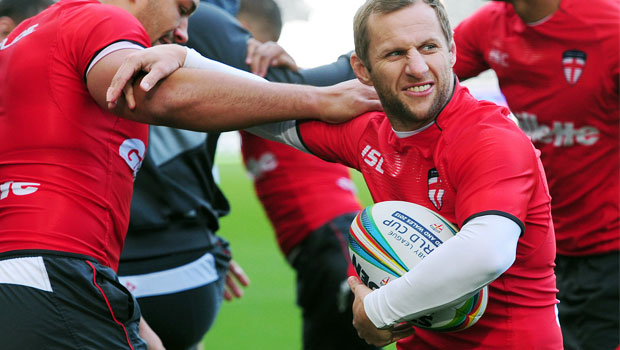 Rob Burrow is desperate to play for England as they seek revenge over New Zealand in Saturday’s World Cup semi-final.

The tournament hosts will line up against the Kiwis at Wembley looking to avenge the 32-22 defeat at the same stage of the 2008 competition.

They will be underdogs going into the match but have started to build some momentum after a 34-6 quarter-final win over France.

A likely final against Australia is the prize for victory, with the Aussies taking on Fiji at the conclusion of the first semi-final.

The Leeds Rhinos ace is one of four survivors from the Kiwi defeat five years ago but, while Ben Westwood, James Graham and James Roby are all likely to start at the weekend, Burrow might have to settle for a place on the bench.

And the 31-year-old has made it clear how much it would mean if he was selected for the showpiece event.

“Like everyone else I want to play,” he said. “Just to play for England, first and foremost to represent my country, is a great honour, and with it being a semi-final as well at Wembley, it gives it that extra incentive to want to play.”

England were not at their best in the last World Cup and have yet to play to their full potential this time around.

But Burrow believes that, with the way they performed against the French, there are grounds for optimism that things are moving in the right direction.
“It was a disappointing exit last time,” he added. “We’re in a similar situation now.

“We probably never really played massively well in that tournament and I still think we’re improving in this, so it’s very similar.”