Posted by Vincent Henderson on November 12, 2015 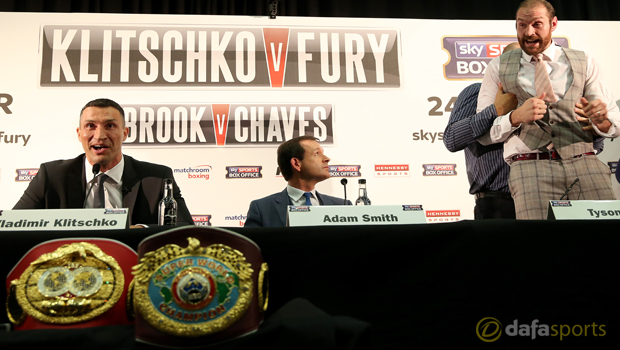 Wladimir Klitschko claims upcoming opponent Tyson Fury is not even the best British heavyweight as he feels both David Haye and Anthony Joshua would defeat him.

The 39-year-old Ukrainian will put his IBF, WBO and WBA world heavyweight belts on the line against Fury in their rearranged fight in Dusseldorf on November 28.

Klitschko, whose calf injury forced the initial bout on October 24 to be postponed, has already said that he expects one of the hardest tests of his career against the undefeated Fury.

However, he feels that the Mancunian would have been no match for former WBA champion Haye had their planned fight taken place before Haye pulled out due to a serious shoulder injury that required surgery.

Klitschko, who took Haye’s belt with a comfortable points win in 2011, also believes upcoming 26-year-old Joshua, who he has sparred with in the past, is also a fighter that possesses too much for Fury.

He said from his Austrian training camp: “I fought David Haye and I’ve sparred Joshua and can tell you David Haye would have knocked Tyson Fury out if he had taken that fight.

“It was not easy (when I fought) David Haye. Haye was fast with his hands and footwork, it was extremely complicated to hit him.

“Tyson Fury is not a power puncher. He does not have power behind his punches, is it with combinations that his opponents are TKO’d?

“Anthony Joshua is still raw but improved a lot so I think he would (beat Fury), yes. He would win that fight, too.”