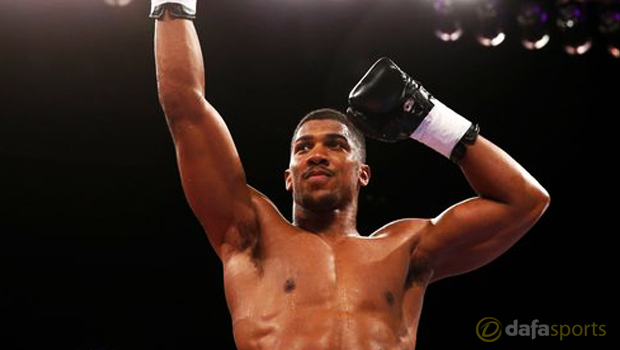 IBF world heavyweight champion Anthony Joshua insists he has the power to beat Dominic Breazeale and continue his meteoric rise through the division when they fight later this month.

The Olympic gold medallist will defend his IBF title for the first time since he won the strap after stopping Charles Martin.

Joshua will once again return to the 02 Arena in London and he is the heavy favourite to win again.

The Watford-born star will come up against an undefeated fighter in Breazeale but ‘Trouble’ has yet to face anyone on the same level as Joshua.

However, the American has been confident since the fight was announced and he claimed last week that the Brit only won his gold medal because it was on home soil.

The pair have continued their war of words, with Joshua adamant his opponent is in for a tough night on June 25.
“I don’t even know if there’s a rematch clause, I’m not bothered,” he said on an episode of The Gloves Are Off. “I’m not losing that belt.

I’ve just got to gauge who I’m in with and exploit him. I think I’m strong enough to hurt Dominic.

I think that’s why people are supporting me along my journey, because I’ve delivered every time I’ve stepped in the ring.
“My ambition ain’t changed since I started. That belt hasn’t made me feel like I’m macho man.

I was the man I am before the belt and I remain that way anyway.

Man to man I’m still who I am, still hungry and still want to prove myself time and time again.”