Posted by Vincent Henderson on December 8, 2015 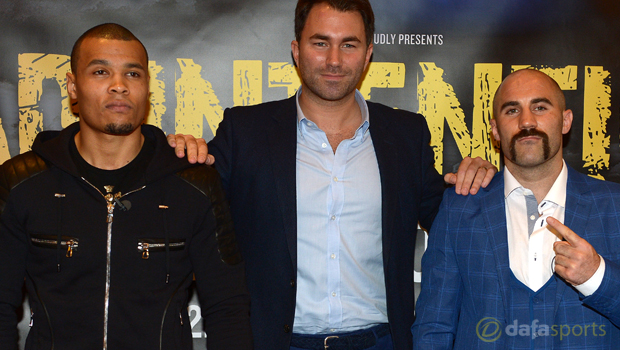 Middleweight Chris Eubank Jr insists he will punish Spike O’Sullivan for his pre-fight actions when they meet at the 02 Arena on Saturday night.

O’Sullivan’s comments on social media have angered the 26-year-old who will be looking to bounce back from his loss to Billy Joe Saunders.

The pair have continued to trade insults in the lead up to the fight, with O’Sullivan confident he will stop his opponent. He comes into the fight with 15 knockouts from 22 fights, but his rival has a similar record with 15 from 20.

Saturday’s clash should finally see the feud end in the ring although Eubank Jr insists there will be only one winner following a tough training camp.

“I’ve trained like an animal, like a barbarian, and this guy is going to feel the full force of my training on December 12,” he told Sky Sports News HQ.

“For me boxing isn’t a personal thing, it’s a business, it’s a sport, it’s something that I do because I love the sport. For him, he’s used social media, Twitter, Facebook – to put it lightly – to be extremely disrespectful towards me to try and get underneath my skin.

“Over the last three years, he’s been doing this, so that’s why it’s a grudge match, that’s why I’m putting so much training and effort into this one – because this guy needs to be punished for what he said.”