Boxing: Anthony Joshua in no hurry for world bout

Posted by Vincent Henderson on December 22, 2015 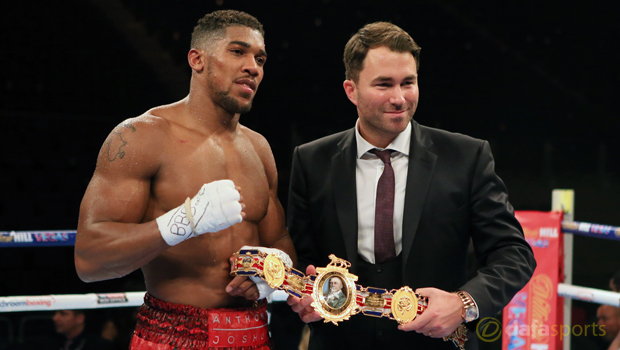 British heavyweight champion Anthony Joshua has revealed that he is in no rush to fight for world glory, as he aims to gain more experience in the division.

The 26-year-old has a perfect record of 15 victories by knock-out in 15 professional fights, with his latest success over bitter rival Dillian Whyte helping him to secure the British crown.

The Olympic gold medallist has now been touted as a possible opponent for WBA, WBO and IBO world champion Tyson Fury in the future, but has confirmed that he is in no rush to fight his compatriot.

He said: “I’d like to say 18 months as time is a virtue. Experience is key for me right now, so the next 12 months will be building. I’ll take my time, bide my time, watch the division. I am a work in progress.”

The Hertfordshire-born fighter admits that he will not turn down an opportunity to fight for world glory, but insists his main priority for the time being is to fight Robert Helenius for the European heavyweight title.

“If a shot did come, we would take the opportunity, but if we had it our way I’m sure we’d keep on building for another 12 to 18 months,” he added.

“There’s options, which is good, but personally I would like to go down the European route and try and aim for that belt as well as the Commonwealth and British before I get to world level.”

The likes of Dereck Chisora and David Haye have also been mentioned as potential opponents for Joshua during 2016, with Haye set to fight Mark de Mori at the O2 Arena next month.