Posted by chris schweizer on February 7, 2017 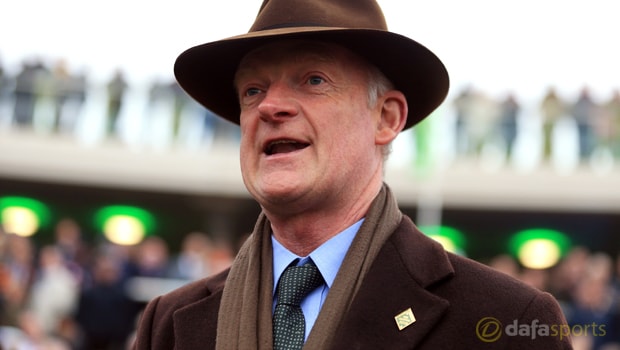 Willie Mullins has revealed that neither Faugheen nor Min will be running at next month’s Cheltenham Festival.

The Irish trainer is hoping the Rich Ricci-owned duo will be fit enough to race before the season is out but it looks as though both will now have to target the Punchestown Festival in April.

Mullins, leading trainer at the Cheltenham Festival for the last four years, had already announced that reigning Champion Hurdler Annie Power was going to miss this year’s festival and he has now added two more big-name stars to the injury list.

Faugheen, Champion Hurdler at Cheltenham in 2015, has not run since last January and was forced to miss a recent engagement at Leopardstown with what his trainer believed was a pulled muscle.

Further tests have revealed a more serious issue for the nine-year-old, who has been beaten just once in 13 career starts to date.

“We had hoped Faugheen had just tweaked a muscle but we’ve had it checked out and it’s a stress fracture,” said Mullins.

Meanwhile, Min has a bruise and will be denied the chance to face old foe Altior in the Racing Post Arkle.

Nicky Henderson’s charge beat Min to win the Supreme Novices’ Hurdle last March and both remain unbeaten as novice chasers this term, leading to much anticipation ahead of what was set to be a fascinating rematch in the Cotswolds next month.

Mullins added: “It’s a real shame with Faugheen, we needed everything to go right and obviously it hasn’t.

“There are options at Fairyhouse and Punchestown for Min, hopefully he makes one of them, while we’ll try to get Faugheen ready for Punchestown.”

Alan King’s Yanworth is the 4.50 favourite for the Champion Hurdle, with Faugheen ruled out, while Mullins’ Yorkhill is now priced at 6.00.