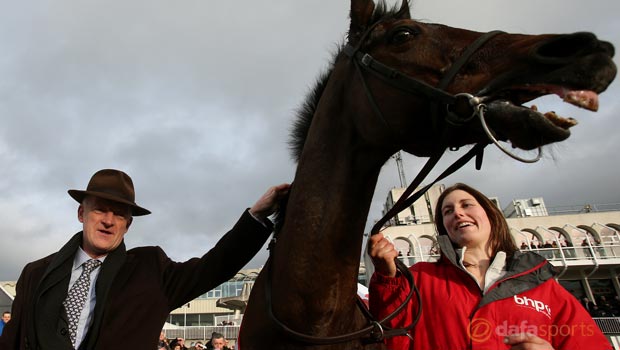 The 11-year-old has been retired after a storybook racing career that included a world record 22 Grade 1 victories.

Hurricane Fly won his first Cheltenham Champion Hurdle in 2011, returning two years later to become only the second horse ever to regain the two-mile jumping crown.

The son of Montjeu won 24 of his 32 races over hurdles, but finished well-beaten in the French Champion Hurdle at Auteuil when last spotted in June.

In March of this year, Hurricane Fly had finished third at Cheltenham behind his younger stablemates Faugheen and Arctic Fire in the Champion Hurdle.

His spiritual home was at Leopardstown where he enjoyed an unbeaten 10-race winning sequence at the Dublin venue – each of his successes coming at the top level.

Mullins paid tribute to the career of one the all-time hurdling greats.

“What can you say about him? He’s a legend of a horse. This day was always going to come and it’s great that we’re doing it on our terms, rather than due to an injury or something like that,” he said.

“He’s a horse who has everything – speed and stamina and an incredible bravery and aggressiveness. I think those are the key factors.”

Mullins appears to have a ready-made replacement in the form of the unbeaten Faugheen.

He extended his winning sequence to 10 with brilliant victories at Cheltenham and Punchestown in the spring and will be expected to return to Prestbury Park next March to defend his crown.

Faugheen is 2.20 to win the 2016 Champion Hurdle with last year’s Triumph Hurdle winner Peace And Co 12.00 for trainer Nicky Henderson.