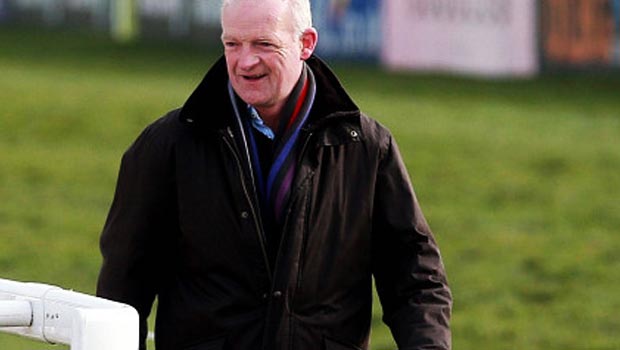 Top trainer Willie Mullins is confident that he has a shot at a second Grand National victory, despite Ballycasey being his only runner in the Aintree showpiece.

Mullins, who won the National with Hedgehunter a decade ago has a vast number of horses heading to Liverpool, but has just the one chance in the big race on Saturday.

However, he is upbeat about the prospects of Ballycasey being a contender, saying: “I think the spring ground will be better for him and his breeding suggests he will stay the trip. I am looking forward to running him there.”

Mullins will, however, have an imposing entry in the Aintree Hurdle with the first three finishers in the Champion Hurdle all expected to run – Faugheen, Arctic Fire and Hurricane Fly – along with Annie Power.

Meanwhile, AP McCoy has hinted that he will take the ride on Shutthefrontdoor for his 20th and final Grand National, as he bids to end his career in style, having won the big race just once – on board Don’t Push It five years ago.

McCoy has a choice of two for his final National outing, with Cause Of Causes his other option, but the Irishman is leaning slightly towards the Jonjo O’Neill-trained Shutthefrontdoor at the moment.

He added: “Shutthefrontdoor won the Irish National and has not run since winning at Carlisle in November.

“If you look through the form book, the Carlisle race and the Irish National were not particularly strong, but he is trained by Jonjo O’Neill who has an unbelievably good record in training horses for staying chases. If I am on Shutthefrontdoor, he has a very good chance.”