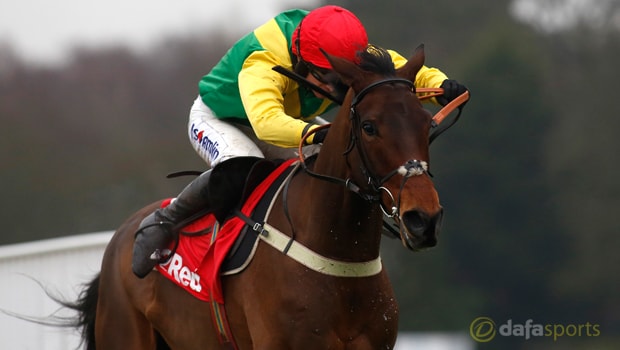 Colin Tizzard has decided to abort his novice chasing campaign with Finian’s Oscar and bid instead for the Stayers’ Hurdle at Cheltenham in March.

Finian’s Oscar was an impressive novice over timber last season.

He missed the Cheltenham Festival although he recorded a Grade One success in the Mersey Novices’ Hurdle the following month at Aintree.

His only defeat came when going down in a head-bobber behind Bacardys in Punchestown’s Champion Novice event over 2m5f in April.

This term, he won his first two starts over the larger obstacles but has since been defeated in a pair of graded novice chases, at Sandown and Ascot.

Tizzard admits he simply may not be “brave” enough for chasing and has opted for next week’s Cleeve Hurdle at Cheltenham to gauge whether or not staying hurdles may be a better option ahead of March.

“We’re going to switch back to hurdles for the rest of the season, with the aim being to run in the Stayers’ Hurdle,” said the trainer.

“He jumps fences adequately, but I don’t think he’s that brave.

“If he doesn’t nearly win the Cleeve we might go back to the RSA or JLT (in March) and it might not hurt him to have a run over hurdles before returning to fences in any case.

But the Cleeve and the Stayers’ is our view and what will probably happen.

“I need to look after him. I don’t want to run him in a big race over fences at Cheltenham when there’s a possibility he could shake them up in the Stayers’ Hurdle.

On last season’s hurdles form, you’d have to think he could be a major contender as well.”

Finian’s Oscar is currently 13.00 to win the Stayers’ Hurdle at the Cheltenham Festival in March.