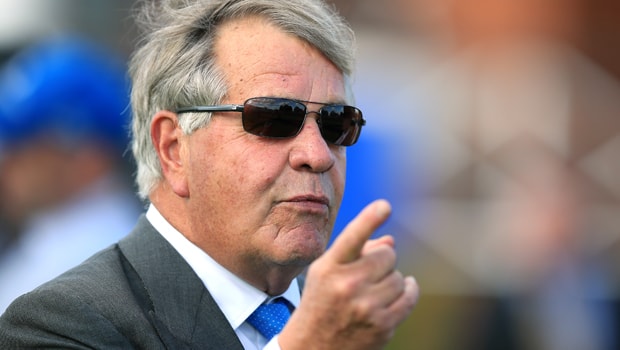 Sir Michael Stoute may well land a record-breaking sixth career win in the King George VI And Queen Elizabeth Stakes at Ascot on Saturday, but the trainer is adamant he can’t split his pair of contenders.

A field of eight are set to go to post and the market is currently headed by the Stoute-trained pair Poet’s Word and Crystal Ocean.

Both were winners at Royal Ascot last month and both hold strong claims. They don’t work together at home and, while he’s content to let them square off now, Stoute admits he is none the wiser as to which might prevail.

“They have separate owners and it’s a logical race for both of them mid-season,” said the trainer.

“The official handicapper has 1lb between them, so there’s not a lot between them and we don’t work them together at home.

“They’re very easy and straightforward horses. There’s nothing complex about either colt.”

Poet’s Word is already a Group One winner having taken the notable scalp of Cracksman in the Prince of Wales’s Stakes last month.

He is potentially blessed with a turn of foot that might prove decisive at Ascot on Saturday.

Crystal Ocean meanwhile registered his third victory from as many starts this season when he landed the Hardwicke Stakes over the Ascot course and distance last month.

Second in the St Leger last term, he’s unlikely to be found wanting should the King George become a test of stamina.

Stoute’s tally of five wins in the race is matched by Dick Hern and Saeed bin Suroor and while both his charges are expected to go close on Saturday, he isn’t getting carried away with the prospect of setting a new benchmark.”

‘Excitement’ may not be the right word – I just want to get them both to Ascot on Saturday in one piece.

I am looking forward to the race,” he added. “It is a very high-level race and is always competitive.

Poet’s Word is 3.25 to win the King George VI And Queen Elizabeth Stakes while Crystal Ocean is 3.75.