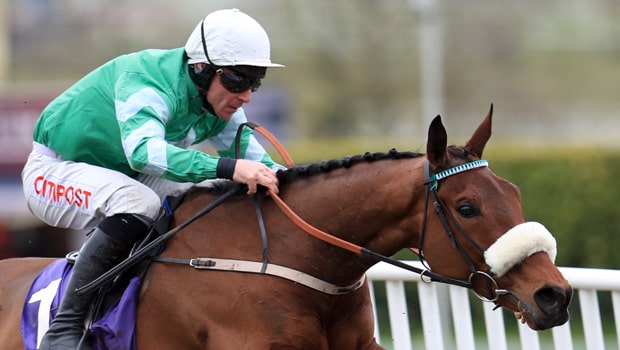 Owner Philip Reynolds has revealed that Presenting Percy is now 50/50 to go straight into next month’s Cheltenham Gold Cup without a prep run over fences.

Trainer Pat Kelly aborted plans to run in the Red Mills Chase at Gowran Park last weekend on account of the ground, although Presenting Percy does retain an option in the Bobbyjo Chase at Fairyhouse this weekend coming. If he misses that target, it will be straight to the Cotswolds for the Gold Cup on March 15.

Having stormed to victory in the RSA Chase last March – his second success at the Cheltenham Festival – Presenting Percy has run only once since, landing a Grade Two over hurdles last month at Gowran Park.

While it was not strictly the plan, Reynolds says it is now possible they will be going to Cheltenham next.

“We could have run him last weekend and may well run him this weekend. Every bit of rain we’re getting will help,” said Reynolds.

“Certainly after winning the Galmoy Hurdle, the intention was to go back to Gowran – which was the same route we took to the RSA Chase last year.

“I see there’s 11 entries. It would be nice to get him out again in a small field – just to try and minimise the risk as much as possible. I’d say it’s 50/50 at this stage as to whether he’ll run or not.

There’s a chance he will.” If he does not get a run un it Fairyhouse this weekend, all concerned with Presenting Percy remain confident he can do himself justice on the biggest stage of all at Cheltenham, despite what will have been an irregular preparation.

“When Pat told me he was happy if that was the route we ended up taking, I was perfectly happy about that,” Reynolds added.

“I’ve spoken to Davy (Russell, jockey) about it and he said straight after he won the Galmoy Hurdle that if he went straight to Cheltenham he wouldn’t be bothered either.

“I think the Gold Cup is probably one of the very few races in Cheltenham that you could get away with doing that.”

Presenting Percy remains favourite at 4.00 to win the Gold Cup, with King George winner Clan Des Obeaux nearest to him in the betting at 5.00 following his Denman Chase win at Ascot last Saturday.