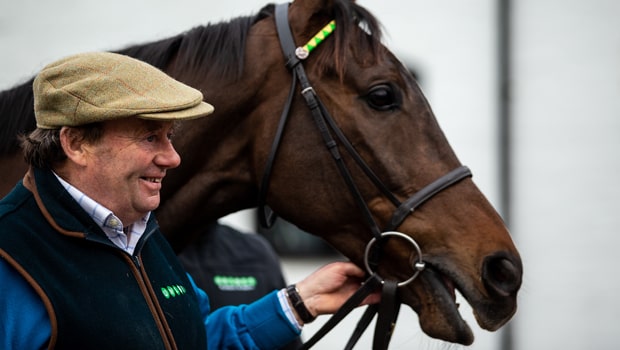 Trainer Nicky Henderson insists stable star Buveur D’Air is in top shape as he tries to become the sixth horse to record three successive wins in the Champion Hurdle at Cheltenham on Tuesday.

The eight-year-old was expected to be the favourite but his shock defeat to stablemate Verdana Blue in the Christmas Hurdle at Kempton saw his price drift.

Only Hatton’s Grace, Sir Ken, Persian War, See You Then and Istabraq have all achieved three wins in a row and connections are confident the bay gelding will add his name to that list.

Despite the setback, Buveur D’Air returned to winning ways last month after winning at Sandown.

He is priced at 3.50 to win the race, while mare Apple’s Jade is priced at 3.00. Other contenders include Laurina at 4.50 but Henderson believes his charge will prove too much.

“I think I would be comfortable to say he is as good as we have had him all year,” said Henderson.

“Barry (Geraghty) came and schooled him and then rode him in a bit of work last week and thought he felt great – sometimes he tells me he doesn’t.

“It would be great if he could do it as he would join history if he could. I do think it is more competitive than last year, but I don’t think he was right last year.

“Our two biggest problems are undoubtedly the two Irish mares and they are getting 7lb. If the ground goes soft it will suit Buveur D’Air, but it will also suit Apple’s Jade and Laurina.

“Nothing changes on that front. Buveur D’Air has been in good form, but I am frightened of the two mares. I think Laurina might be the slower of the two and in that case Apple’s Jade is the one we have to beat.”