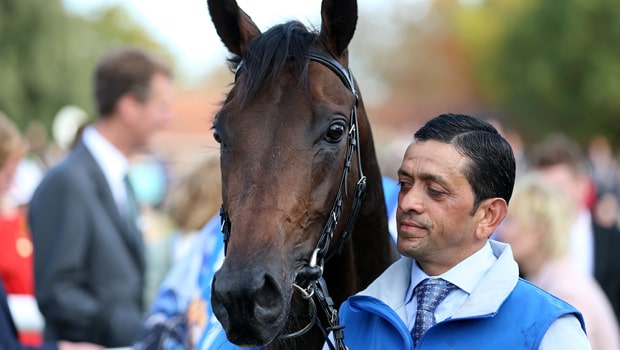 Trainer John Gosden is confident that stable star Too Darn Hot will reproduce the form he showed as a juvenile when he competes in the St James’s Palace Stakes at Royal Ascot on Tuesday.

The three-year-old won every race he competed in during 2018, with Gosden keeping him active in the autumn.

He missed the Guineas due to a setback before then finishing runner-up in the Dante Stakes and Irish 2,000 Guineas.

Despite failing to return to winning ways, Gosden is adamant his charge will be the one to stop on Tuesday. “Too Darn Hot has probably been the worst managed horse this year, by me and the manager,” conceded Gosden.

“He missed the Guineas, which was tragedy because that would have been a perfect race. He then had to walk for two weeks before going for the Dante, when he was quite frankly about 80 per cent fit.

“He ran really well in Ireland and finished second, but we all ask horses to do impossible things and I think it would have been much better if we had targeted the Irish Guineas from the outset. From the horse’s point of view, that has not been very clever.

“Having said that, Too Darn Hot is coming into the St James’s Palace Stakes in good form and I hope that he can put in a quality performance as he certainly has not had the opportunity to do that so far this season with his more than interrupted preparation through the spring.

“I think I am the happiest I have been with him so far this season. Last year went so smoothly it was almost ridiculous, a maiden followed by a Group Three, a Group Two and a Group One. This year has been quite the opposite.”

Too Darn Hot is the 3.00 favourite for Tuesday’s race, with Phoenix of Spain also well fancied at odds of 3.25.