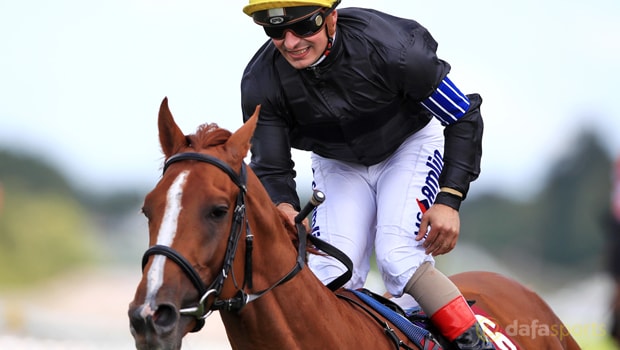 Jockey Andrea Atzeni feels Defoe will head to next month’s St Leger at Doncaster with a big chance after his latest success at Newbury.

Roger Varian’s colt took the step up in trip and class in his stride as he won the Group 3 Geoffrey Freer Stakes at Newbury from Wall Of Fire, making it a perfect four wins from four starts this season in the process.

Defoe, running beyond a mile and three furlongs for the first time, travelled supremely well into the race, quickly getting the better of main market rival Frontiersman at the two-furlong pole.

It was left instead to Hugo Palmer’s four-year-old Wall Of Fire to lay down the challenge and he attempted a brave run up the rail but Atzeni slammed that door shut, forcing Josephine Gordon to switch out late on.

The stewards allowed the result to stand following an inquiry into the incident and Atzeni is looking forward to Doncaster, should connections elect to take their chance in the last remaining British Classic of the season.

“He’s a gem of a horse. He’s very laid-back and you wouldn’t think he’d had a race,” said Atzeni afterwards.

“The horse is getting better and he could be anything. At least we know that he stays.

The Leger will be a very good race, but this fellow will go there with a big chance. He will also be a nice four-year-old.”

Few jockeys in recent times have ridden better at Doncaster than Atzeni who landed the Town Moor Classic in successive years from 2014 with Kingston Hill (for Varian) and Simple Verse for Ralph Beckett.

Defoe is available at 9.00 to win the St Leger next month after his latest Newbury win.