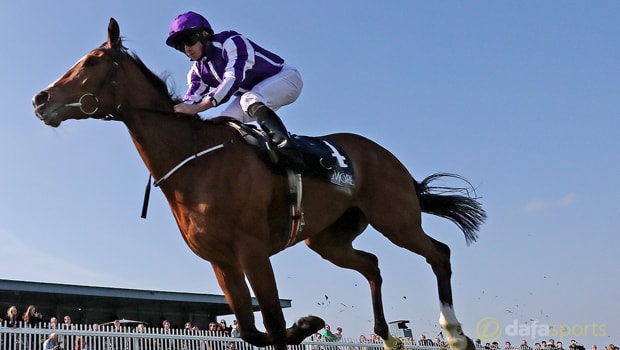 Trainer Aidan O’Brien has confirmed connections are considering a run in the Tattersalls Gold Cup for Minding after she won at Naas on Monday.

The four-year-old went into the Camelot Irish EBF Mooresbridge Stakes as the heavy favourite and she did proved her class after a stunning ride.

Minding, a former winner of the 1000 Guineas and the Oaks, was too strong for Moonlight Magic, Brendan Brackan, Johannes Vermeer and connections are now looking ahead to a busy season.

With sterner tests on the horizon, O’Brien admits jockey Ryan Moore was delighted with her performance and the Tattersalls Gold Cup is now their main aim.

He said: “We’re delighted to get her started back, it’s nice to get her going again. Ryan was very happy with her.

“She has the options of the Tattersalls (Gold Cup) or the Lockinge in Newbury. We’ll probably be looking at the Tattersalls, I’d imagine that’s where we’ll go.

“We’ll take it one at a time but we’d be thinking of the Prince Of Wales at Royal Ascot then.

“She’s a great filly and what she did last year was incredible. To go back to a mile at the end, it’s very rare a horse can do that over a mile, a mile and a quarter and a mile and a half.

“She’s done well physically and has changed into a four-year-old.