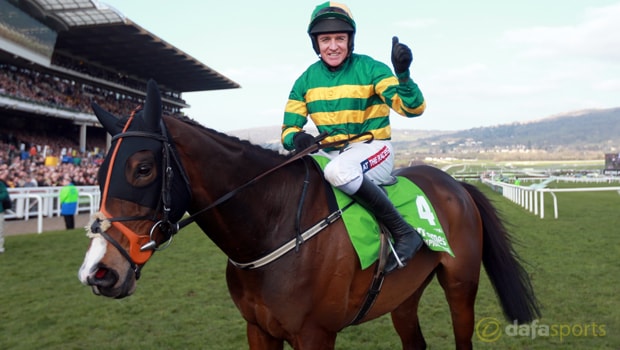 Barry Geraghty couldn’t have been happier as his ‘lucky charm’ Jezki made a winning return to the racetrack after more than 20 months on the sidelines.

Trained by Jessica Harrington for owner JP McManus, Jezki and Geraghty won the Champion Hurdle at Cheltenham in 2014 together.

The nine-year-old returned to action at Navan on Saturday last, winning a conditions event over two-miles, his first start since beating Hurricane Fly over three-miles in the World Series Hurdle at the Punchestown Festival in 2015.

Geraghty was thrilled with what Jezki delivered on his comeback run, as the partnership extended their record to six wins from six runs together.

“He was entitled to win, but he did win well, Jessie had him in good shape. He felt good, he picked up nicely from the second-last flight and he kept on well up the run-in,” he wrote in his latest blog.

“While he should improve for the run, he had to be up for Saturday’s race, and he was.

It was an encouraging run, it’s difficult to fault it. He couldn’t have done much more than he did.”

Jezki is rumoured to be pencilled in for a tilt at the Stayers’ Hurdle at this year’s Cheltenham Festival having impressed when collaring Hurricane Fly in is only run over three-miles to date.

He’s likely to stick to two-miles for what should be his final stop before heading to the Cotswolds in March, according to Geraghty. “Jezki is a lucky horse for me.

I have ridden him in six races and, fortunately, he has won all six. Hopefully he will be able to build on this now and move into the season.

Jessie mentioned the Red Mills Hurdle at Gowran Park as a next potential target,” he added. Jezki is 8.00 to win the Stayers’ Hurdle at Cheltenham, with Unowhatimeanharry the current favourite at 3.00.