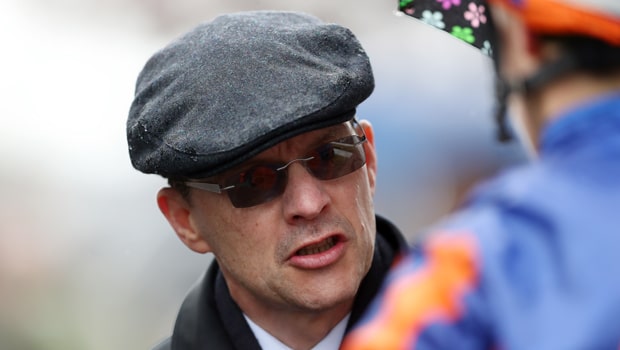 Aidan O’Brien feels his Epsom Derby winner Anthony Van Dyck is in good shape ahead of Saturday’s King George VI And Queen Elizabeth Stakes, though he admits he’s unsure if he can thwart Enable.

John Gosden’s dual Prix de l’Arc de Triomphe-winning mare is the star attraction for the 1m4f all-aged Group One, having made a successful reappearance over a shorter trip in the Eclipse at Sandown this month.

Enable returns to her optimal trip on Saturday but she will be spotting 8lb to her younger rival and O’Brien hopes Anthony Van Dyck can shine, despite meeting defeat in the Irish Derby at the Curragh – where he was second to stablemate Sovereign – since his Epsom success.

“We are happy with Anthony since the Curragh and everything has gone well with him since then,” said the trainer. “We thought he ran very well. It was a good race and there were some very smart horses in there and we were happy with his run.

“Sovereign is a good horse in his own right, he had good form this year and good form last year – we weren’t surprised that when he went up to a mile and a half he would be capable of a good run over that trip at some point.”

O’Brien has previously saddled Galileo to claim both the King George VI And Queen Elizabeth Stakes and the Epsom Derby in the same season in 2001, though he also managed to win the Curragh Classic in between times.

Enable and Anthony Van Dyck featured amongst a field of 11 left standing for Saturday’s Ascot highlight on Monday, with O’Brien also leaving in Magic Wand, Norway and Hunting Horn. The Ballydoyle supremo admits he’s uncertain about thwarting the mare.

“I don’t know (about beating Enable). We try to run the horses in the race that suits them all and hopefully they will run as well as we can get them, and that is how we approach every race really.”

Crystal Ocean, winner of the Prince Of Wales’s Stakes at Royal Ascot last month, represents Sir Michael Stoute and is amongst the main dangers to Enable, seemingly.