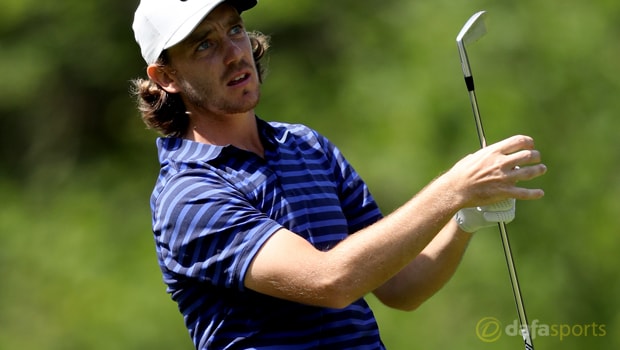 England’s Tommy Fleetwood insists he is just taking each day as it comes as he tries to win the US Open at Erin Hills on Sunday.

Fleetwood, 8.00 to win the tournament, has enjoyed a solid weekend so far in Wisconsin after rounds of 67 and 70, along with a 68 on Saturday.

He birdied the first and eighth on the front nine, before then picking up three more gains on his way to the clubhouse.

However, he dropped a shot on the par-five 18th, although it could have been much worse but for a stunning chip onto the green.

The 26-year-old is now tied in second alongside Justin Thomas and Brooks Koepka, with Brian Harman one shot in front on 12-under-par.

Thomas set a new tournament record with a round of 63 but Fleetwood was content with his own game as he tries to win his first major this weekend.

He told Sky Sports: “It was a good save, it was a good bogey. It was a really good round of golf and I hardly missed a shot.

I did feel very comfortable with my swing, but that fifth shot on 18 was my best shot of the day.

“Winning would change my life, I know that, but I’ve pictured winning the US Open a lot of times before.

Doing it all night is not going to help and not make any difference, let’s just concentrate on each day as it comes.

“Today I felt really good, played really well, and I have to wake up with the same feelings tomorrow if I’m going to have a chance.

I don’t think I could play any different or score any better than I have done, and you can’t do anything about what anybody else is doing.”