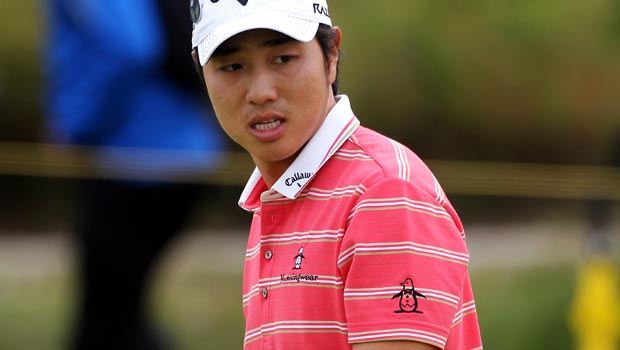 Sang-Moon Bae hit a seven-under par 65 on Saturday to open up a four-shot lead heading into the final round of the Frys.com Open in California.

The South Korean hit five consecutive birdies early in his round on a hot streak from holes two to six. Bogeys followed on the seventh and 13th, but Bae finished his round in spectacular fashion to consolidate his position at the top of the leaderboard.

A birdie on the 15th was followed by an eagle on the 17th, when his hit his tee shot on the par four to only a few feet from the hole. Bae then ended the day with a 15-foot putt for a birdie on the final hole to ensure he finished day three on 16-under

He sits four-shots clear of Zachary Blair in second , with another four players, Matt Kuchar, Brooks Koepka, Scott Langley and Martin Laird, all sitting one shot further back. Kuchar is 7.00 to win the Frys.com Open, while Koepka is 10.00 and Laird 16.00.

Bae, who has tasted victory once before on the PGA Tour at last year’s Byron Nelson Championship, isn’t resting on his laurels going into the final day. He admits there is a large bunch of great players grouped behind him capable of putting together a winning charge on Sunday.

He told the Golf Channel: “A four-shot lead makes me a little comfortable for Sunday, but I don’t think about a win.

”[There are]so many good players behind me. The PGA Tour is always competitive every day, so I don’t play just safe sometimes and aggressive sometimes. I need a really, really good combination. I putted really good this week, so it will be good too [on Sunday].”