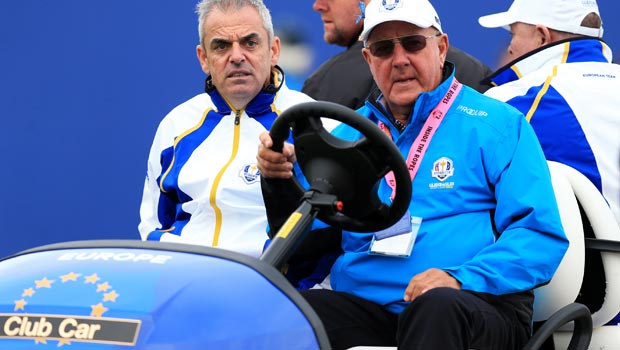 Europe Ryder Cup captain Paul McGinley concedes his team are “slight favourites” to beat the USA at Gleneagles this week.

Hostilities resume in Perthshire on Friday as the USA players look to exact revenge following Europe’s stunning win at Medinah in 2012 which saw Jose Maria Olazabal’s men come from 10-6 behind on the final day.

McGinley is now looking to make his own mark as captain in the biennial golf tournament although he admits he is wary of Tom Watson’s team.

“But we have been favourites before in Ryder Cups. I think our players have deserved it, and I think it’s a situation to embrace.

“The guys have worked very hard to be in the position they are. Having said that, I did a bit of calculation myself when the two teams were formulated, and Tom’s team’s average ranking position was 16 and ours was 18. So this is not a weak American team.

“We might be slight favourites with the bookies, but the two teams are very well balanced and very close together.”

USA captain Watson admits he is looking to get at the likes of world number one Rory McIlroy and Europe’s Ryder Cup talisman Ian Poulter.

“The bottom line is that if each of your players wins more than they lose, we win as a team. That is what I have told our team,” said Watson.

“Poulter, he’s an 80% victor over the matches he has played in. We would like to reduce that.”

Europe are 1.50 to make it a hat-trick of Ryder Cup victories on the bounce while the US are outsiders at 2.63.