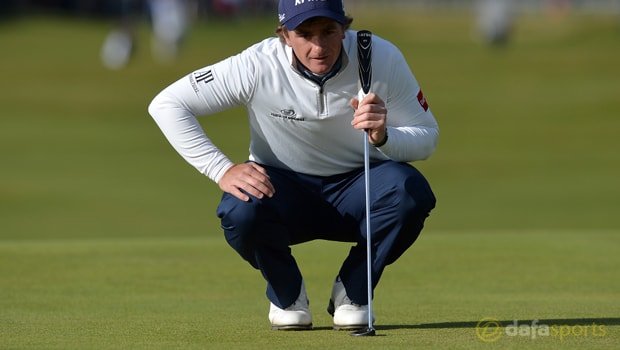 Paul Dunne continued his excellent form with an opening five-under-par 67 at the Alfred Dunhill Links in Scotland to earn a share of the overnight lead.

The Irishman claimed his maiden European Tour title in England last week at Close House, landing the British Masters by one stroke from Rory McIlroy after an outstanding final-round nine-under 61.

Dunne picked up exactly where he left off on day one of the Alfred Dunhill, carding three birdies and an eagle to reach five-under by the 11th.

He played home in level par, enough to share the first-round lead with Nicolas Colsaerts of Belgium.

The Alfred Dunhill is played across three of Scotland’s iconic Links courses, St Andrews, Carnoustie and Kingsbarns, but for Dunne the Old Course will always hold a special spot in his heart.

He led the 2015 Open Championship after 54 holes as an amateur and admits that experience helped him towards his first professional win last week.

“I think the Open was a great thing for me here because it opened so many doors for sponsors and invites and that kind of thing when I turned pro but, also, how many times are you going to lead the Open at St Andrews with one round to go?” he said.

“It was a situation I wasn’t used to at the time and might have overwhelmed me a bit.

But I’m in a better place to deal with it now, I think. I think more good memories than bad.

One that slipped away but then something that kind of set up my professional career as well.”

Defending champion Tyrrell Hatton, fellow Englishman Oliver Fisher, New Zealand’s Ryan Fox and Dunne’s fellow Irishman Shane Lowry all carded rounds of 68 at the home of golf to sit a shot off the lead alongside Frenchman Joel Stalter, who was also four-under at Kingsbarns.

Dunne is 8.50 to win the Alfred Dunhill Links Championship, with Hatton 9.50 to defend his crown while Colsaerts is 23.00.