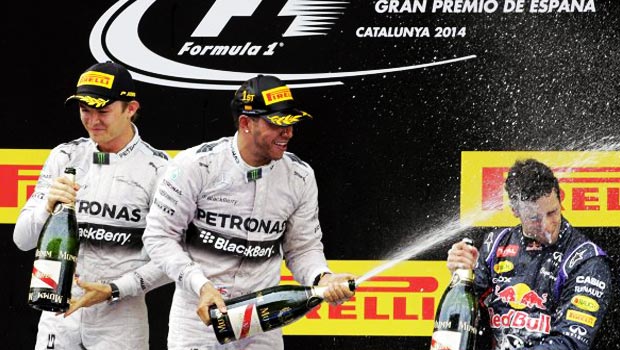 Mercedes driver Lewis Hamilton has revealed that he will be striving to improve at the upcoming Monaco Grand Prix on May 25 despite securing a fourth successive race win at Sunday’s Spanish Grand Prix.

The 29-year-old 2008 world champion is sitting three points clear of his team-mate Nico Rosberg at the top of the current drivers’ standings after he finished just 0.6secs ahead of the German at Barcelona’s Circuit de Catalunya.

It was the fourth time Hamilton had pipped Rosberg in a one-two finish for Mercedes, who have stretched their lead over Red Bull to 107 points at the top of the constructors’ championship after five races.

However, on a personal note, Hamilton felt he didn’t produce his best driving in Spain and he will be looking to put that right when the action resumes in the Principality in just under a fortnight.

The British driver has an added incentive to win in Monaco as Rosberg edged him out to win 12 months ago and he is determined there will be no repeat this time.

“I want to win there,” said Hamilton. “Monaco is one of those I always target before the season – that one and Silverstone are the two real ones you point out.

“I was quick enough to win in 2007 (in his first year in F1) but I couldn’t get past (Fernando Alonso). I had got held up in qualifying and I ended up second.

“When I say that, I don’t mean the whole race. I drove well until the safety car pit-stop period.

“I also struggled with the car last year. I lost three tenths (of a second) in qualifying from turn one to the top of the hill, and yet I only qualified half a tenth behind him (Rosberg).

“I was just very uncomfortable with the car.

“After struggling over the weekend in Spain, I’m going there thinking how I can avoid that, otherwise I will be quick there.”

Hamilton remains the favourite to win this year’s Drivers’ Championship at 1.27, while Rosberg is 4.00 and reigning champion Sebastian Vettel is 21.00 to claim it for Red Bull.