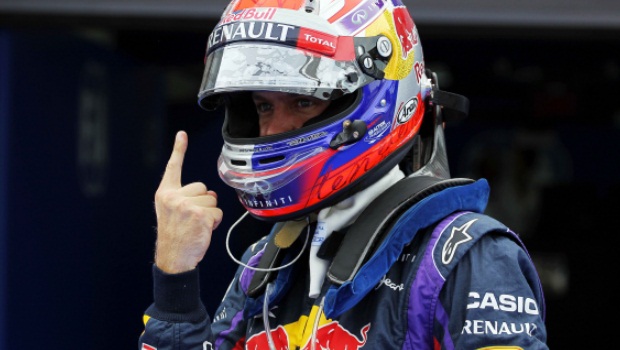 Sebastian Vettel once again showed his dominance as he finished fastest in Saturday’s qualifying at the Korean Grand Prix.

The German has won the last three races but appeared to be struggling for a time during Friday’s practice, with Lewis Hamilton leading the way, but rediscovered his form in the afternoon.

The 26-year-old continued his momentum on Saturday, finishing two tenths of a second faster than Hamilton who will join him on the front of the grid.

Vettel’s Red Bull Team-mate Mark Webber was third fastest but after picking up a 10-place penalty will be forced to start down the grid, with Lotus’ Romain Grosjean taking his place and he will start alongside Nico Rosberg, while Ferrari duo Fernando Alonso and Felipe Massa came home fifth and sixth.

Elsewhere, it was a disappointing day for Kimi Raikkonen as he could only manage 10th, while Jenson Button was a place behind.

The organisers in Korea are currently on high alert due to a typhoon being forecast for Sunday but the current championship leader is feeling confident and fancies his chances of winning his fourth consecutive race.

“It was close today. I had a very good lap in Q3 on my first attempt and thought I would find it hard to do better,” Vettel said.

“On my second attempt I caught Kimi on the warm-up lap and didn’t have time to drop back, but fortunately the first lap was good enough.

“In terms of conditions, we should be okay if it’s dry or wet tomorrow. It’s not clear if we get some rain from the typhoon, but let’s see what happens.”