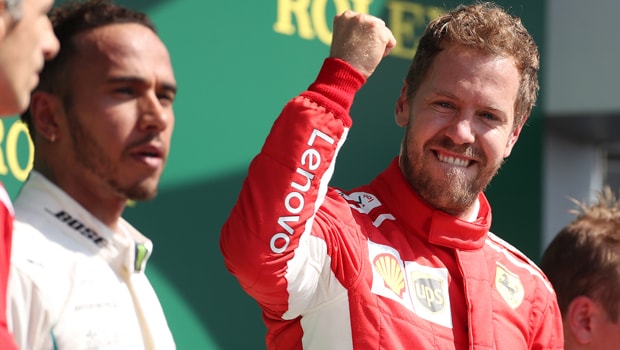 Sebastian Vettel says he is relaxed as Formula One enters the summer break because he knows Ferrari has “a lot of potential” and are still in the hunt.

Mercedes’ Lewis Hamilton has opened up a 24-point lead from Vettel in the Drivers’ Championship following last Sunday’s win in Hungary and, with nine races remaining, time is running out for the German to overhaul his rival.

It was a slightly disappointing weekend from Ferrari, who many thought would suit the Hungaroring, and the Maranello-based outfit will be looking to find some answers over the summer break.

Although Vettel and Kimi Raikkonen managed to take second and third respectively, the Italian team still lost ground on the Silver Arrows in the race for the Constructors’ Championship and the gap between the two sides now stands at 110 points.

The F1 action heads to Belgium next as the field take on Spa-Francorchamps from August 24-26 and four-time world champion Vettel is confident the team will do better.

“This year has shown so far that our car is more efficient, our car is stronger and still has a lot of potential to unleash.

So I’m quite confident with what’s sitting in the pipeline that we can improve,” he was quoted as saying by f1.com.

“Compared to last year, we lost the championship I think because our car wasn’t quick enough to be a match in the final part of the season. I am happy to see that the car is fast, it has worked well on every track so far.

“I think this is the most important thing. Our car has big potential so I feel relaxed, going on holiday, for the races to come.”

Vettel is priced at 2.75 to win the Drivers’ World Championship this year, while Hamilton leads the betting at 1.40.