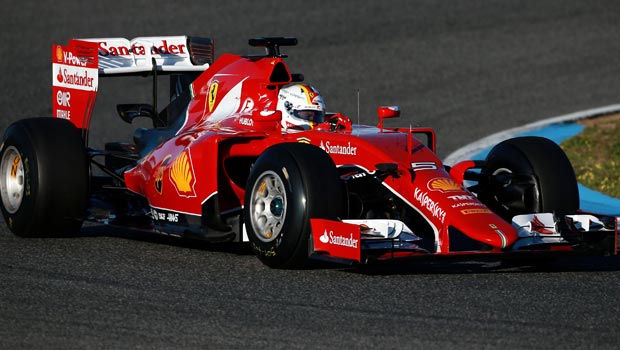 Red Bull driver Daniel Ricciardo believes that Ferrari will join Mercedes in being a big threat to their Formula 1 aspirations in the 2015 campaign.

The 25-year-old Australian eclipsed four-time world champion Sebastian Vettel at the Milton Keynes-based team last term when he was the only non-Mercedes driver to win races which helped him secure a third-placed finish in the drivers’ standings.

However, while he hopes Red Bull’s new RB11 car will help them challenge for honours this year, Ricciardo is well aware that Mercedes will again be the team to catch following their recent impressive first pre-season testing in Jerez.

But Ferrari, who Vettel joined after leaving Red Bull at the end of last season, appear to be the team that has made the most progress looking ahead to 2015.

“Of course we’re aware of what Mercedes did, and the lap time Ferrari put down… it looked good,” Ricciardo said.

“We expect nothing less of Mercedes to be honest, but Ferrari looked like they came out pretty strong.”

Further testing will take place in Barcelona this week and Ricciardo claims he will get a better idea of how strong Ferrari will be from what they do at Circuit de Barcelona-Catalunya.

He added: “So they look good, but are they going to be the same once we start racing?

“I think Barcelona will get us a step closer to that, and then we’ll see where we are. But I’m not taking anything away from them; I think they’ve come out in good form.”

Mercedes’ reigning world champion Lewis Hamilton is 1.70 to retain his title in 2015 while The Field are 2.16.