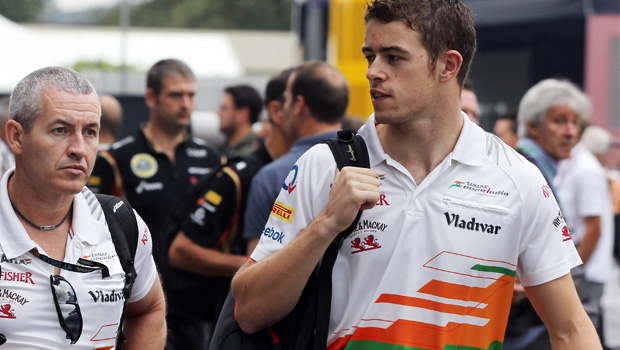 Paul Di Resta is desperately looking to end his no-score run at Singapore Grand Prix as he bids to ensure a future in Formula One beyond 2013 campaign.

The 27-year-old Force India driver is currently suffering one of his worst runs in the sport having gone from four failures to finish in the first two years of his career to four this season, with three coming in the last three races.

Di Resta’s car suffered a hydraulics problem four laps from home in Hungary before Williams’ Pastor Maldonado took out the back end of his Force India car on lap 27 at the Belgian Grand Prix, while in Italy he caused a collision in the opening seconds of the race and was again out of the running.

It is a far cry from the start of the season when Di Resta picked up points in seven of the first eight races, with Pirelli’s change of tyres in the wake of the British Grand Prix at the end of June clearly working against the team.

Since the alterations, team-mate Adrian Sutil’s ninth place in Belgium is the best finish Force India have managed.

Di Resta is looking to stop the alarming run of results and enhance his chances of either Force India taking up the option to keep him for 2014, or be picked up by another team by putting on a good display in Singapore on Sunday.

Di Resta, who finished in a career-high, fourth-place finish at the Marina Bay Street Circuit last year, said: “This is the crucial time for people to make decisions and for me to secure my future, wherever that may be, here or elsewhere.

“With regard to Force India, it’s about understanding the tools you have and doing what you can with them.

“I would certainly like to think I’ve enough of a reputation and I’ve shown the team that when the tools are delivered, and when we’ve a working package, we are strong together.”

Looking ahead to Singapore, he added: “As things turned around quite quickly on us, so things can easily turn around the other way.

“Unfortunately, we’ve just not got the speed at the moment. We need to get performance back before we are going to start scoring points.

“The tyre change has definitely hurt us more than any other team, and other teams have caught up massively and overtaken us, even the likes of Williams and Sauber.

“Maybe there have been other things, but there has been one dramatic change on the car and as a result we’ve lost our strength.

“All I can say is, we’re fighting hard.”