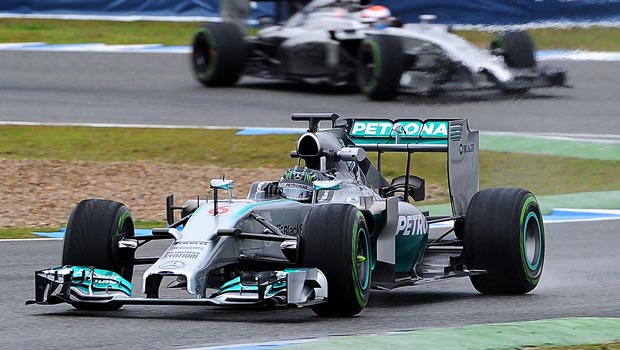 Mercedes driver Nico Rosberg is expecting his Formula One rivals to have used the three-week break to close the gap on his team going into Sunday’s Spanish Grand Prix at Circuit de Catalunya.

The German driver currently leads the drivers’ standings after his win at the season-opening Australian Grand Prix was followed by three successive second-placed finishes behind team-mate Lewis Hamilton in Malaysia, Bahrain and China.

Hamilton is just four points behind him, before a 34-point gap to Ferrari’s Fernando Alonso, while Mercedes are already holding a commanding 97-point lead over Red Bull in the constructors’ championship.

Mercedes’ domination has come about as they have developed the best car and engine to adapt to the new turbo V6 era of the sport.

However, the start of the European season is when teams have had time to start adding the first major developments to their fledgling cars. And Rosberg fully expects to be pushed a lot harder by their rivals than in the opening four races.

He told Speed Week: “Until now we have had a big gap to our nearest competitors.

“But three weeks have passed since China and for sure a lot has happened. So we will have to wait and see.

“I hope that we still have an advantage, but we will have to see how big it is. I am confident that we will still be the fastest.

“But we are also aware that the competition has been working around the clock to catch up.”

Rosberg can be backed at 3.50 to win the Spanish Grand Prix, while Hamilton is 1.57 to make it four successive race wins.