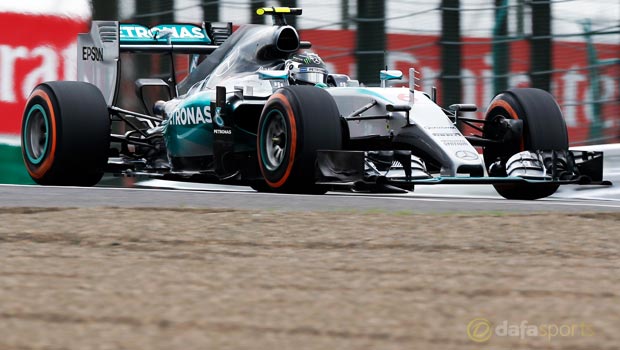 Lewis Hamilton defended the controversial first lap manoeuvre that took him past teammate Nico Rosberg and allowed him dominate the Japanese Grand Prix at Suzuka.

It was not without controversy, however, as Hamilton overtook Rosberg within moments of starting from second on the grid.

Rosberg appeared to have maintained his advantage through the opening corner but Hamilton got the inside line into turn two and squeezed his teammate out, with the German shuffled back into fourth spot as a result.

The defending world champion stood by his move afterwards, insisting he was entitled to maintain his racing line.

“I don’t really feel it was that close. The inside line is the inside line, so it was my corner,” Hamilton said.

“I can imagine Nico was running out of road but that’s what happens when you’re on the outside.”

Rosberg managed to claw his way back to finish second, 19 seconds back from Hamilton, and he was non-committal on the move in the immediate aftermath, although he suggested any chance he had of winning was wiped by Hamilton’s move.

He said: “It got really close on the exit of turn two and I had to back out of it there and that lost me the race.

“I haven’t seen it on TV. For sure it was close. I had to avoid a collision. But it is difficult to comment now.”

The Mercedes pair have been warned in the past about putting each other at risk in racing situations, but team boss Toto Wolff expressed no problems with the incident.

“Lewis had a better start and stuck his nose in. It was a tough corner for both of them,” he said.

Hamilton is now 1.08 to win the Drivers’ World Championship with Rosberg available at 15.00 and Ferrari’s Sebastian Vettel 26.00.