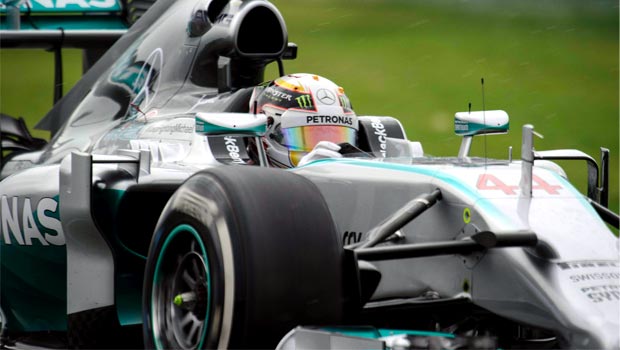 Lewis Hamilton says Mercedes have plenty of work to do if they are to win a fourth consecutive Grand Prix after two mixed practice sessions in China on Friday.

The British driver is aiming to carry on the Silver Arrows’ dominance of the 2014 season this weekend after impressive victories so far in Australia, Malaysia and Bahrain.

The 2008 world champion has won two of those races and had been made favourite to take a third consecutive chequered flag for the first time in his career.

However, Friday’s practice session unearthed some problems for Mercedes, with Ferarri’s Fernando Alonso topping the time sheets in the morning.

Hamilton was forced to cut short P1 due to suspension problems and was later heard on the radio complaining the W05’s balance was incorrect, claiming his car “didn’t feel right”.

Furthermore, he and team mate Nico Rosberg both reported significant tyre wear towards the end of P2.

While Hamilton was able to post the fastest time in the afternoon session, 0.141 seconds ahead of Alonso, he was still unhappy with how the weekend was shaping up going into qualifying on Saturday.

“It doesn’t feel spectacular, it’s a lot harder here than it has been in other places,” he said. “I missed a bit of practice in FP1 and that put me on the back foot a bit.

“Going into this session I’m not really happy with the car, so I will have to go and look at it. I have some work to do. My time was set later in the session than everyone so it’s not really relevant.”

Rain is forecast for Saturday in Shanghai and Hamilton admits that could further damage Mercedes’ dreams of another race win.

“Tonight we have to do a lot of guesswork and analyse the issues you have on track and try and focus on the points of the track where we can really improve the car,” he added.

“Tomorrow when it rains we have to deal with what we have and hope for the best. When we get to the race it’s going to be tricky to drive because we won’t have tested the set-up we have tomorrow in the dry.”

Along with a resurgent-looking Ferrari, Mercedes may also face competition from Red Bull after Daniel Ricciardo and Sebastian Vettel finished practice two fourth and fifth respectively.