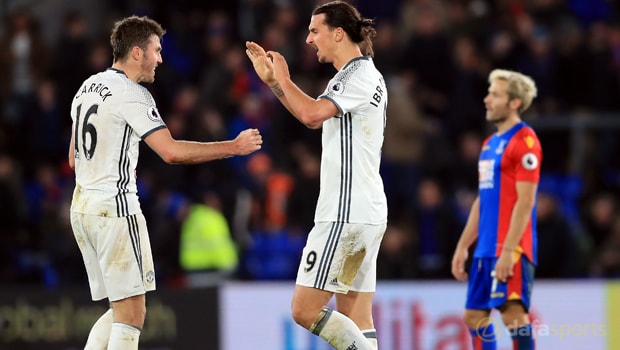 Zlatan Ibrahimovic believes Manchester United are improving with every game after extending their recent strong run on Wednesday with a 2-1 win at Crystal Palace.

The Red Devils headed into the clash at Selhurst Park unbeaten in their previous eight in all competitions and despite being made to work hard for the points, it was Ibrahimovic’s late goal that made the difference.

Following a strong start to the campaign, United struggled during the autumn as boss Jose Mourinho tinkered with his line-up.

However, the Portuguese now seems to be settling on a preferred starting XI, most notably including Michael Carrick in midfield, a decision which has helped free up space for world-record signing Paul Pogba.

The Red Devils are now undoubtedly playing with more confidence and will look to continue their form on Saturday at West Brom.

Ibrahimovic admits that after their earlier blip, his side are now growing in belief and is optimistic that they are only going to improve as the season goes on.

“We are working hard, we have confidence, we believe in what we are doing, we work very hard for it and we will keep focused like we are at the moment,” he told MUTV.

“We have always had the belief and we keep getting more confidence from these games.

“We have been disappointed in some games, so let’s keep going like this and get the three points that we need to get closer to the top.”