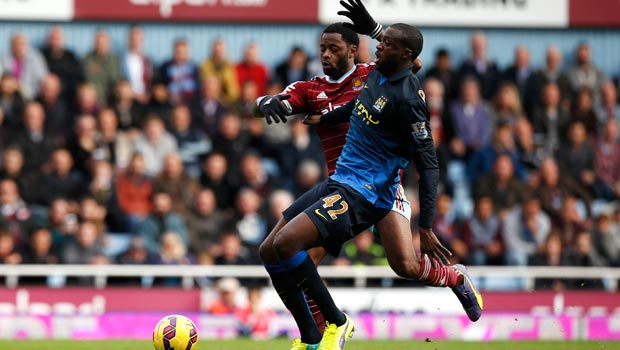 Manchester City slipped to another defeat at Upton Park on Saturday and the latest setback for Manuel Pellegrini’s champions came amid another lacklustre performance from midfielder Yaya Toure.

Toure was the driving force behind City’s title success last season, scoring a magnificent 20 league goals. His powerful running from midfield terrorised defences, but that form is now a distant memory and in nine league games this season Toure has scored only once.

If City are to maintain any hopes of reeling in leaders Chelsea and holding onto their crown Pellegrini must find a way of getting the Ivorian back to his old form.

Against West Ham, just as was the case against CSKA Moscow in the midweek Champions League game, Toure looked a passenger. The lung-bursting runs and seemingly-endless energy of last season is gone, with lethargic performances taking over.

It doesn’t get any easier for City, with next weekend’s Manchester derby at the Etihad already beginning to look like a must-win game. The champions are 1.79 to get the better of Louis van Gaal’s United (3.52) while the draw is 3.52

However, the City boss felt his side could have taken something from the West Ham game.

“We didn’t make the most of the chances we created and also hit the crossbar twice when on another day, those shots go into the net,” Pellegrini said.

The Chilean is under no illusion regarding where things have gone wrong, with Toure’s dynamism sorely missed.

He added: “We didn’t play with our usual intensity in the first half so we’ll look at that and analyse things later.”