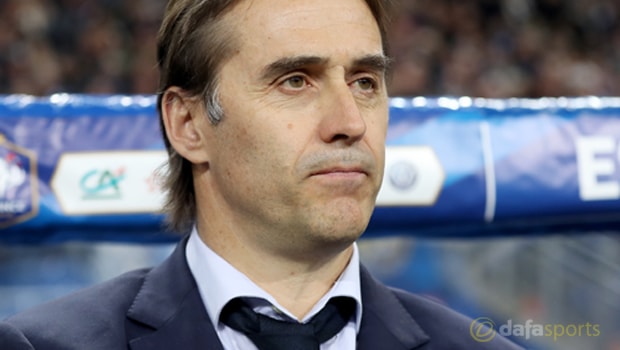 Spain boss Julen Lopetegui says he is assessing all of his attacking options ahead of the 2018 World Cup.

La Roja, who are 8.50 to win the tournament, dominated their qualifying pool, finishing top of Group G to book their place at the Finals in Russia, where they will meet Portugal, Iran and Morocco in the group stages.

After winning the 2010 World Cup, a triumph sandwiched between European Championship triumphs in 2008 and 2012, Spain have struggled in recent major tournaments.

Lopetegui’s appointment prompted mixed reviews but he has proved his doubters wrong and his more straightforward approach seems to have benefitted the side.

Alvaro Morata has led the line in recent outings but the boss is looking for depth and says he will be tracking Diego Costa’s progress, ahead of his return to Atletico Madrid in January.

Another man he has been interested in is Lyon’s Mariano Diaz, a man born in Barcelona but who has represented the Dominican Republic in a friendly.

With it not having been a competitive fixture, he remains eligible for the country of his birth and has been in stunning form since joining Les Gones from Real Madrid in the summer.

Lopetegui admits both Costa and Diaz could be attacking options in the summer, while he has also refused to rule out the possibility of a call-up for Atletico Madrid’s French-born defender, Lucas Hernandez.

He said: “Costa? Whenever he’s been fit, he’s been called up. Now that he’s back, we’ll look at him again and analyse him. If we think he needs to be called up, he will.

“Mariano and Lucas? Mariano, yes. He’s Spanish and eligible for selection. We’ve gone to watch him and we’re studying him.

“In the case of South American countries, there’s dual nationality.”