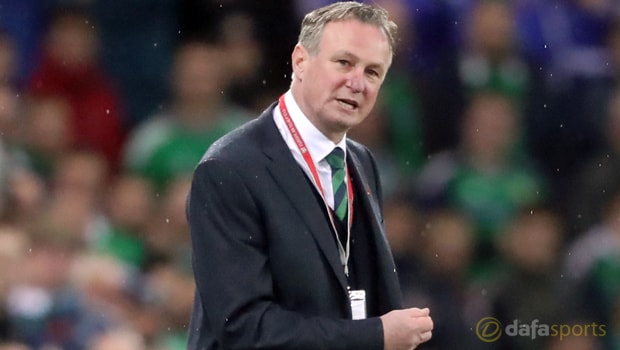 Northern Ireland manager Michael O’Neill has vowed to utilise the sense of injustice and anger his squad felt in the wake of defeat to Switzerland as motivation for the second leg of their World Cup play-off.

Northern Ireland face an uphill struggle to reach a first World Cup since 1986 after they lost 1-0 to the Swiss in Belfast on Thursday evening.

Ricardo Rodriguez scored with a penalty just before the hour mark after a controversial hand ball decision again Corry Evans.

Granit Xhaka’s shot was blocked by the Northern Ireland defender, with the general consensus being the ball hit his shoulder but the referee awarded a spot-kick.

It was a game that Switzerland had dominated but they were wasteful in front of goal and, with the threat of securing an away goal themselves on Sunday, Northern Ireland would likely have settled for a scoreless draw.

O’Neill was bemused by the penalty award, while his misery was compounded by the fact that Evans must sit out the return leg having been booked for his trouble.

“The referee has no-one in his line of sight. Corry’s arm isn’t in an unnatural position, it’s by his side.

The ball hits him on the back more than anything. I thought the referee had blown for a foul or an offside.

O’Neill also felt Switzerland were fortunate to retain their full allotment following a dangerous tackle inside 15 minutes. “It’s such a defining moment in the match.

The opening tackle by Fabian Schar was borderline. I thought it was a red card. The referee hasn’t done us any favours.”

Despite the setback, Northern Ireland must use the anger they felt at the end of the first leg in the correct manner on Sunday, says their manager.

“I’ll have to pick the players up. There’s anger in the dressing room. We’re going to have to find a way to get a goal back. Stuart Dallas’ injury is a blow.

I thought the players who came on did well. We might look to freshen the team up on Sunday. We have to channel the anger,” he added.