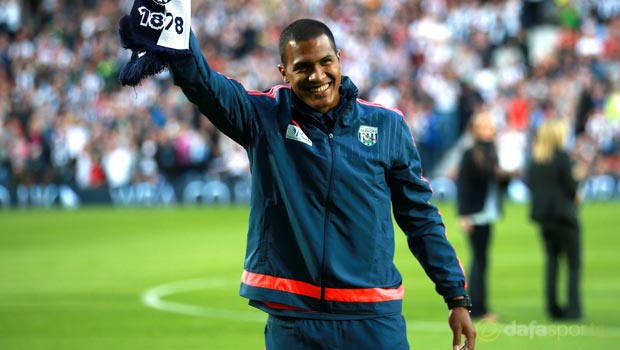 West Bromwich Albion manager Tony Pulis believes the club have a signed a fantastic goalscorer in Salomon Rondon but warns the new arrival may take some time to adapt to the Premier League.

The Baggies shelled out a club-record fee of £12million for the Venezuela international and the 25-year-old has put pen-to-paper on a four-year contract.

The powerful striker arrives at the Hawthorns having spent three years over in Russia with Rubin Kazan from 2012-2014 and the remainder of his time at Zenit Saint Petersburg.

The Caracas-born ace, who has also played for Aragua, Las Palmas and Malaga, bagged 13 goals in 26 league appearances last season and arrives in England with positive recommendations from previous managers Manuel Pellegrini and Andre Villas-Boas.

Rondon is the fifth new face at the Hawthorns this summer, joining James McClean, James Chester and Rickie Lambert in their squad, as well as Arsenal’s Serge Gnabry on a season-long loan.

Pulis is hoping the striker can get off to a quick start but the former Stoke boss admits it may take a little while for the new signing to find his feet.

“He’s got a fantastic goalscoring record in some of the top leagues in Europe and for his country,” he said. “He’s 25 years of age and still to fulfil his full potential.

“We hope he hits the ground running of course but understand it might take him time to settle.”

West Brom lost their Premier League opener 3-0 to Manchester City on Monday and they will be hoping to bounce back away at Watford on Saturday.

Rondon is expected to go straight into the squad but, even with the extra fire-power, the Baggies are still outsiders at 3.30, a draw is 3.25 while the hosts are 2.25 favourites.