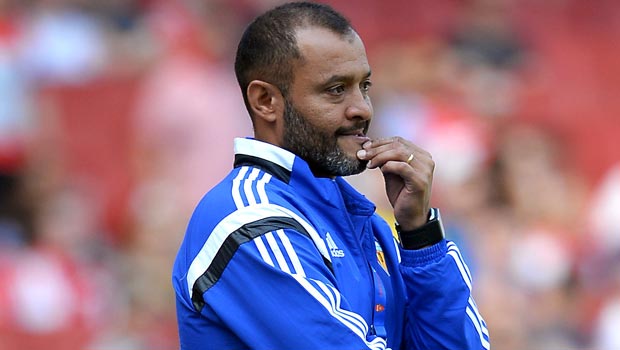 Valencia boss Nuno Espirito Santo believes his side can start challenging the likes of Barcelona for major honours in the years to come.

The Portuguese boss has rejuvenated Los Che since taking over as manager of the club last summer.

Valencia finished in a disappointing eighth position last season but the 41-year old has successfully steered his side into fourth place in the table after winning 16 of his opening 26 league matches in charge.

The twice Champions League finalists are only eight points off top of the table Barcelona going into the final 12 games of the campaign and although a title tilt may just be out of reach this season Santo is convinced they can become serious challengers in the years to come.

He said: “I think we could [challenge Barcelona]. It’s not always about money in football, that’s why I love the game, we can win, and we have this idea we can win all of their matches. I’m not afraid.”

The former goalkeeper believes the club match his ambition going forward and he feels that if they can keep the nucleus of their squad together then they can really push on to the next level.

He continued: “I will describe Valencia as an ambition to grow, a desire to win, it is incredible. If the culture of the club develops this way the players stay, next year they will know each other, routines will be more simple to introduce.”

Los Che picked up a creditable draw at reigning champions Atletico Madrid last time out to stay only a point behind Diego Simeone’s side in the table and consolidated their position in the top four.

Next up for Santo and his team is a home match with Deportivo at the Mestalla. Valencia are 1.37 heavy favourites to win the game on Friday with the visitors available at 7.88. The draw is on offer at 4.69.