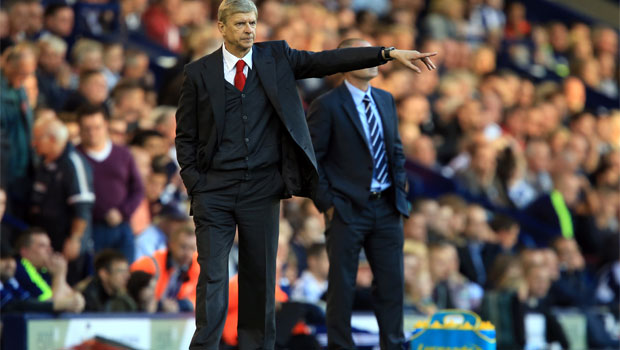 Arsenal boss Arsene Wenger is refusing to rule Manchester United out of the title race just yet and says they have the quality to get themselves back in the hunt.

The Gunners have made a flying start to the season and currently sit top of the Premier League, with their latest three points coming on Saturday with an emphatic 4-1 win over Norwich.

It has been a different story at Old Trafford as United, now under the leadership of David Moyes, slipped further off the pace following a disappointing 1-1 draw at home to Southampton.

The pressure is mounting on Moyes and many have written off United’s title chances already as they sit eight points behind the Gunners.

However, Wenger does not buy into that theory and believes United are still in with a shout of defending the title they won at a canter last season.

“It is too early. They are not out of the title race,” Wenger said. “We are only two points in front of all the others.

“Are Man United out of the title race? No, but of course 10 points starts to be a little gap.

“If you have the choice, you want to be in the race at the top, but you cannot rule Man United out today.

“They have big players, big experience and they are a big club.

“It (points advantage) is three games basically, that is very quick in our league.”

Meanwhile, Wenger has also revealed that Theo Walcott has suffered a setback with his recovery from a stomach problem and is facing at least another two weeks on the sidelines.