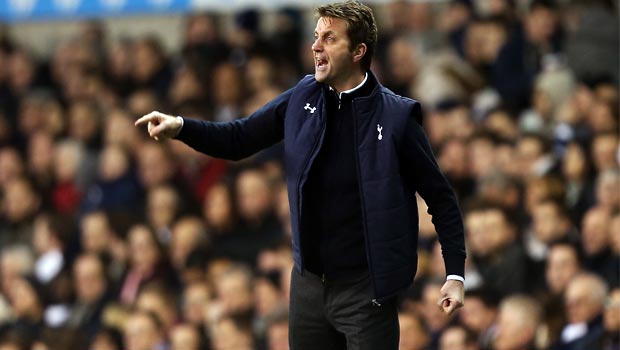 Tim Sherwood has hinted that his Tottenham predecessor Andre Villas-Boas made a huge mistake by allowing Steven Caulker to leave for Cardiff ahead of his return to White Hart Lane on Sunday.

The 22-year-old came through the ranks at Spurs but despite making 29 appearances last season, was sold by AVB in the summer after failing to guarantee the youngster regular football.

Despite Cardiff’s poor form this season, Caulker has been largely excellent, often captaining the side and his performances have seen him earn a recall to the England squad for Wednesday’s friendly with Denmark.

Spurs go into Sunday’s clash as 1.83 favourites, with the draw at 4.79 and Cardiff available at 10.53 and although they have a poor record after playing in Europe, they will expect to beat the struggling Welsh outfit.

However, they undoubtedly have a number of defensive frailties and a lack of numbers at the back has seen midfielder Etienne Capoue occasionally forced to deputise, while Caulker’s pace and athleticism would surely have also helped some of his more sluggish colleagues.

With their involvement in the Europa League, Tottenham’s squad has often been stretched to its limits and Sherwood has now hinted that he is still unhappy with AVB’s decision to let one of English football’s brightest prospects leave last summer.

“He [Caulker] wanted game time and more than the previous manager would guarantee him,” he told Sky Sports. “The club decided they would let the player go and they think they had a good deal. It is up to Steven to build on that and prove the club were wrong to let him go.

“He wanted to go and play. The only thing I could have done is say ‘you will play more football’.”