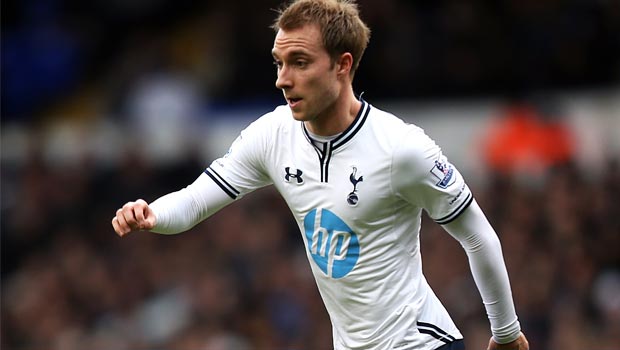 Christian Eriksen has given Tottenham’s push for a top-four finish a boost by declaring he will not walk away if they miss out on the Champions League.

Spurs are currently four points behind Manchester City in fourth but Manuel Pellegrini’s men have two games in hand, while Arsenal, who occupy third spot, are six points in front having played the same amount of games.

Tottenham will continue to fight but it looks increasingly likely they will miss out on the Champions League again, leading to suggestions key men could leave.

Jan Vertonghen has already hinted he will look to move on if they miss out and there are sure to be one or two others who think the same way.

However, Danish ace Eriksen is not one of them and has committed his long-term future to the club.
“I don’t know how other guys are thinking, but I’m happy where I am, and hopefully we’ll get to the Champions League anyway,” he said.

“I think it is important for the club, and the calibre of player that could come, or stay. I think everybody wants to go to the Champions League.

“I’ve tried it before at Ajax, and you see everything is bigger, the atmosphere, the TV rights, the people watching.

“The Europa League is great, but the Champions League is what everybody wants, it’s the best place to play.”

Eriksen believes they can prove their Champions League credentials with a victory over a Chelsea side who could go seven points clear at the top of the table with a win this weekend.

Tim Sherwood’s men are big 6.11 outsiders to pull off an upset at Stamford Bridge, with Chelsea the 1.54 favourites.