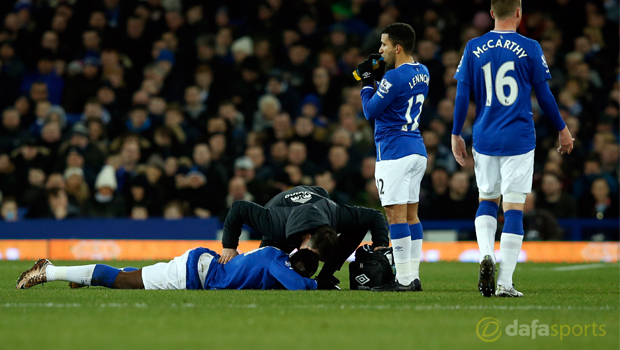 Everton boss Roberto Martinez is hopeful that the back injury Romelu Lukaku picked up in Wednesday’s 3-0 win against Newcastle will not keep him out of Saturday’s trip to Stoke.

The 22-year-old Belgium international was forced out of the game at Goodison Park after being kneed in the back by Magpies central defender Fabricio Coloccini just nine minutes into the match.

Lukaku battled on until half-time before being replaced by Arouna Kone as an Aaron Lennon goal and a brace of late penalties from Ross Barkley secured the points in a comfortable win for the Toffees.

Martinez revealed that Lukaku was struggling to move properly after taking the knock and he will be assessed on Thursday with a view to determining how long he could be absent for.

But the Spanish coach is keeping his fingers crossed that his influential striker will be able to face Mark Hughes’ Stoke side at the Britannia Stadium this weekend.

“It was a very sore one. He stayed on the pitch for a period and found it really tough to open his legs,” Martinez told Sky Sports.

“He had a knee right in the middle of his back and probably had a neurological reaction and found it really difficult to be able to walk.

“We’ll assess him. Obviously we’ve got a game around the corner against Stoke and we’ll see if he can recover for that game.”

Meanwhile Martinez does not expect defender John Stones to be out for too long with a hamstring injury which ruled him out of the Newcastle game and Sunday’s FA Cup fourth round win at Carlisle.

Everton are 2.75 to build on their win against struggling Newcastle with another victory at Stoke, who are 2.70 to secure the three points and the draw is 3.25.