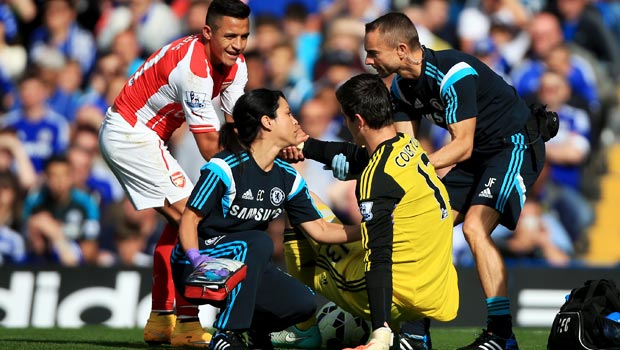 Chelsea have confirmed that goalkeeper Thibaut Courtois has been given the all-clear after he was substituted due to a head injury in Sunday’s win over Arsenal.

The Belgian international collided with Arsenal winger Alexis Sanchez early in the game and was later brought off and replaced by former number one Petr Cech.

Courtois was taken to hospital after the game after he apparently bled from the ear.

Speaking on Monday, Courtois played down any reports of a serious injury as he used his personal Twitter account to thank the fans for their well wishes.

He said: “Thanks for all the messages! I’m already feeling better. Now I’m resting to be recovered and back on the pitch soon. Great victory yesterday.”

However, the Blues, 1.50 to win the League, have now confirmed that the former Atletico Madrid loanee suffered a cut and is now fit to link up with his Belgium team-mates for the European Championship qualifiers later this week.

A club statement read: “Chelsea can confirm Thibaut Courtois went to hospital during our Premier League game against Arsenal for precautionary tests on a head injury. Those tests came back all clear.

“Thibaut was treated for a minor cut to his ear and was released from hospital last night.”

This season new rules have been implemented by the Premier League in regards to the treatment of suspected concussion.

He told Sky Sports: “New rules on concussion are having a positive impact.

“FIFA carried out a number of studies over a number of years. It is a serious issue. There was a case involving concussion in a Belgian game this weekend too. In the case of the Premier League, I think it was good to replace Courtois.”