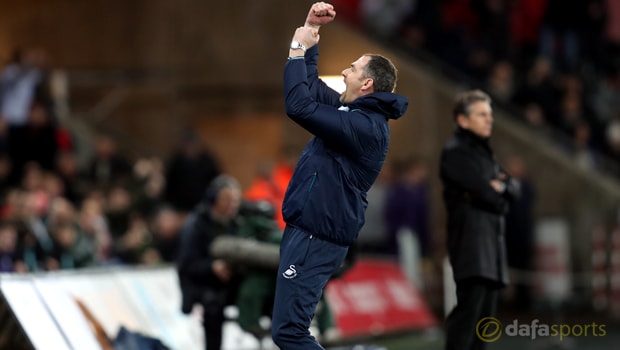 Swansea boss Paul Clement admits Tuesday’s 2-1 win over Southampton could prove “massive” in their battle against the drop.

After beating Liverpool in their previous fixture, the Swans repeated the trick as goals from Alfie Mawson and Gylfi Sigurdsson saw them outdo the Saints and, perhaps more importantly, maintain their two-point lead over the bottom three.

Clement has impressed since arriving at the club around the turn of the year and seems to have added to his squad wisely during the January window, with Martin Olsson, Tom Carroll, Luciano Narsingh and Jordan Ayew all signing on at the Liberty Stadium.

However, with Leicester, Burnley, Hull, Bournemouth and Middlesbrough on the agenda in five of the six games after their visit to the Etihad, it promises to be an eventful few weeks for the South Wales club.

Swansea are now 2.63 to be relegated and boss Clement believes the resolve they showed on Tuesday will stand his side in good stead in their bid to beat the drop.

“A massive result for us, to back the great away win at Liverpool up with a home win in a really hard game,” he said. “They peppered our box with crosses.

We showed big character. Our second goal was fantastic, a great counter.

“The performance was so-so, the result massive. We have done more than I expected. Since the heavy loss to Arsenal we have taken one or two really important games.”