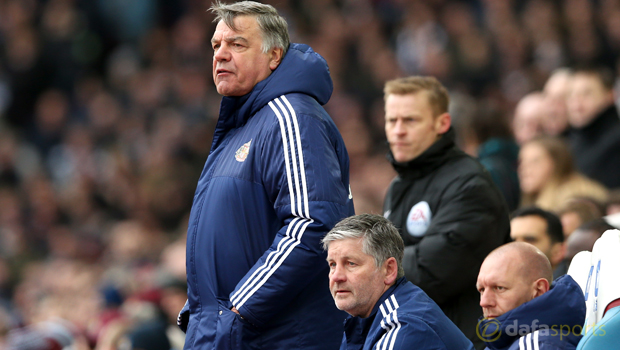 Sunderland manager Sam Allardyce has set his squad the target of securing four points from their next two outings as they continue to fight against relegation.

The Black Cats suffered another setback in their pursuit of Premier League survival on Saturday as Allardyce’s former club West Ham claimed all three points at Upton Park.

West Ham further enhanced their chances of securing a Europa League spot with a 1-0 victory after Michail Antonio scored a wonderful solo goal.

Sunderland subsequently remain just one place off the foot of the table but are only a point from safety with 11 games still left to play.

Allardyce still firmly believes that the north east side can ensure they are playing Premier League football again next season and has set them a realistic target for their next two outings.

The Stadium of Light outfit are set to host Crystal Palace on Tuesday night before travelling to the south coast to face Southampton at the weekend.

The 61-year-old admitted that the pressure is really starting to grow and hopes that four points out of a possible six will provide them with a timely boost.

Allardyce said: “We’ve made it a massive pressure game for ourselves on Tuesday night against Palace because we then play Southampton away.

“We’ve really got to pick points up out of both those games because after that we don’t play for two weeks because we should play Everton.

“That means other Premier League teams around us will play and, if they win, that distance becomes greater and more and more pressure comes on us.

“So in the next two games we’ll have to deliver, for me, at least four points. Hopefully we can get more. That’s a lot of pressure on ourselves.”

Sunderland can be backed at 2.50 to get back to winning ways when they host Palace, who are priced at 2.88 to claim the victory, while the draw is available at 3.10.