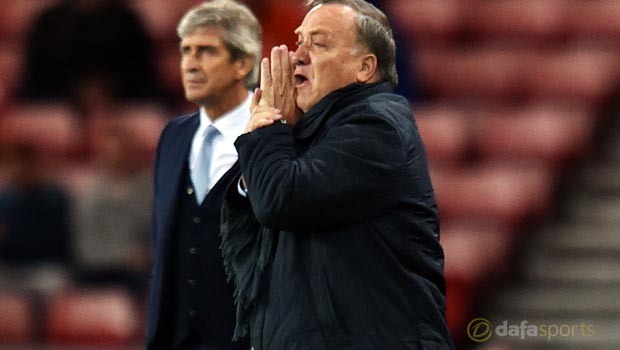 Sunderland boss Dick Advocaat refused to be too downbeat despite his side’s 4-1 Capital One Cup defeat to Manchester City.

The Black Cats were looking for a morale-boosting win after a dreadful start to their Premier League campaign but a ninth-minute penalty from Sergio Aguero, strikes from Kevin De Bruyne and Raheem Sterling plus an own goal by Vito Mannone saw the hosts trail 4-0 at half-time.

Ola Toivonen did pull one back on 83 minutes but it was no more than a consolation as the Wearside faithful witnessed yet another drubbing on their own patch.

The north-east outfit have yet to win in the league this term and sit bottom of the top-flight standings with just two points to their name.

Advocaat has been critical of his players at times after their defeats and there is a clear sense that all is not well in the camp but, despite the margin of the loss, the Dutch tactician made it clear he saw things that he liked in the early stages of the contest.

“Maybe you think I will be negative, but I’m not,” he said. “Yes, I’m negative we lost 4-1, but I think the way we played in the first 25 minutes was quite positive.”

Things are hardly likely to get any easier as Sunderland’s next match is a trip to Old Trafford to face Manchester United.

Getting even a point from the Theatre of Dreams would be considered an incredible result given the way things have gone so far, but another thrashing could signal the end of the former Rangers man’s stint at the club.

He has already stated that he will walk away if they find someone better to do the job but it is open to debate if anyone would want to replace him at what looks to be a sinking ship.