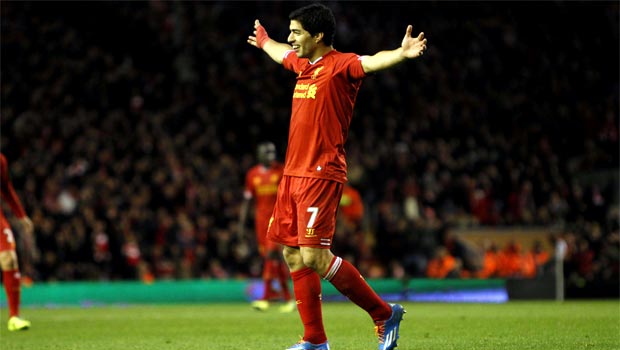 Luis Suarez may be offered the captain’s armband for Liverpool at Tottenham on Sunday.

With Steven Gerrard out for the next month due to a hamstring injury, the talismanic striker may not just be asked to lead the line but the team itself.

The captain’s armband is up for grabs, with Daniel Agger not able to hold down a first-team place, and as Suarez is widely accepted as the Reds‘ best player it is only fitting that manager Brendan Rodgers considers the Uruguayan for the role.

He has quickly made up for lost time since returning from a 10-match ban, banging in 15 goals to be the top Premier League goalscorer.

Rodgers said: “The idea is to get to the halfway point and be in contention. We know the difficulty of the games but this is a team that works really hard.

“We have got some outstanding individuals who are out and perhaps there are some teams who can cope better than us – but I still have a group of players who are going to die for the cause.”

Spurs will be well aware of the threat the visiting side poses as they themselves bid to record a third straight Premier League victory.

Midfielder Lewis Holtby has done his homework and reckons they can follow the example of Hull City, who kept Suarez at bay in a 3-1 win over the Merseysiders earlier this season.

“We have the ability to stop him (Suarez) and if you see the game they lost against Hull, defensively they did really well against Suarez. We have to do similar things,” he said.

“With the momentum we have, these good performances in the last two weeks, we have to show it against a big side like Liverpool, especially at home.

“Confidence is now up to a level where we can play against a very good Liverpool side who will come here and give us a battle. But we are up for it, and we have to play our attacking football.”

Victory for Spurs would see them draw level with Liverpool on 30 points in the Premier League.