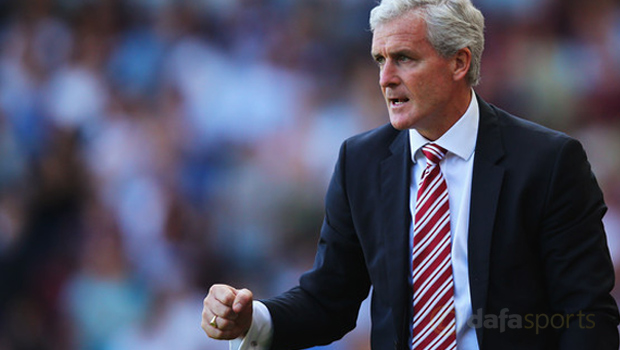 Stoke manager Mark Hughes has vowed to play an attacking brand of football this season after picking up back-to-back wins prior to the international break.

The Potters made a poor start to the Premier League campaign and failed to secure a victory in their opening six games.

However, they were much improved as they took all three points off Bournemouth and Aston Villa to move five points clear of the bottom three before the recent break.

Hughes was handed cash to spend in the transfer market over the summer and added some big names in Xherdan Shaqiri, Ibrahim Affelay, Glen Johnson and Joselu among others.

Having finished ninth in successive seasons, and with a stronger squad, Hughes is expected to take the club forward this term.

The Welshman felt the performance against Villa was the best he has seen so far this season and insists they will approach every game with an attacking mentality.

Hughes said: “If you look at the Villa game last weekend I thought it was a good 90-minute performance.

“I have talked before about not being able to keep levels up for a full game, but we got that. The first 45 minutes in terms of control was probably the best we have played.

“I think the supporters enjoyed it and hopefully there is more to come – that’s our intention.

“We are going into all games away from home trying to be positive and trying to win them. If you do that then you get more points on the board.”

Stoke are priced at 3.80 to continue their winning form when they return after the international break to take on Swansea, who can be backed at 2.00, while the draw is 3.30.