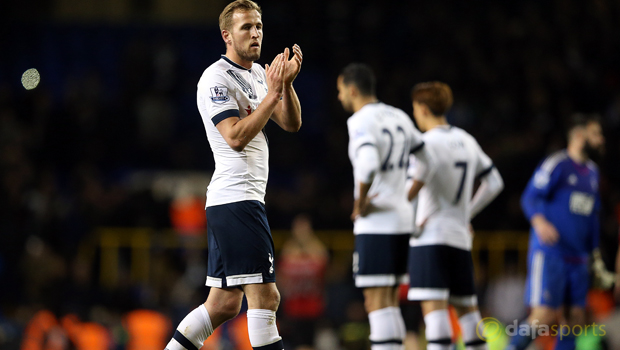 The Lilywhites went into the game hoping to reduce the eight-point deficit to Leicester and everything looked to be going to plan when Craig Dawson put through his own net in the first half.

Despite hitting the woodwork three times during the game, Spurs could not add to their tally and were made to regret their poor finishing when Dawson grabbed an equaliser with 17 minutes left.

It means Tottenham now find themselves seven points behind the Foxes with just three matches left and they are currently 12.00 to top the standings.

Next up is a trip to Chelsea on Monday, a game they are 2.40 to win, with the draw 3.30 and the Blues 2.80, before matches against Southampton and Newcastle to close out the campaign.

Kane himself still has plenty to play for, as he looks to claim the Golden Boot, and insists Monday’s draw does not mean the title race is over.

The England forward feels there will be a number of twists and turns to come, especially with Leicester facing Manchester United away at the weekend.

“It has not gone. We need to keep fighting,” Kane told Sky Sports. “We felt we needed to win this game so we are disappointed.

“We felt we could easily have won the game if we played in the second half like we did the first. It is football. All we can do is keep fighting.

“We have Chelsea next. Hopefully Man United can do us a favour.”