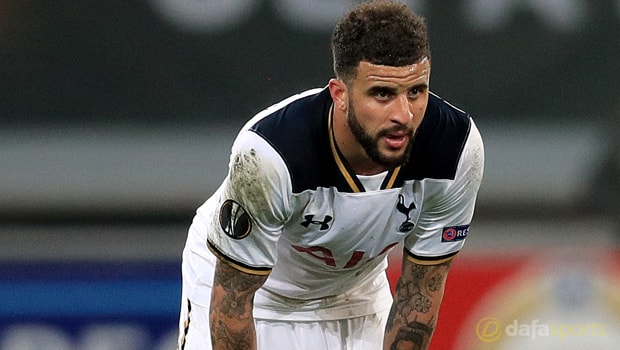 Tottenham defender Kyle Walker is confident his side can win a trophy this season as well as finish above bitter rivals Arsenal.

The Spurs right-back has enjoyed another busy season for the north London giants, playing 22 times so far in the current campaign.

He has helped them climb into third in the Premier League, while the club are also through to the quarter-finals of the FA Cup.

Mauricio Pochettino’s side are also in the last 32 of the Europa League but they are 1-0 down on aggregate in their tie against Gent.

While their title chances appear slim due to the form of Chelsea, Spurs can go all the way in either the FA Cup or Europa League according to Walker.

He told reporters: “The culture [is the biggest change at the club]. When I first came in, it was all, ‘We might get Champions League, we might not’.

“But now we’ve turned that corner and we want more. Last season, even though it was disappointing, it was a big learning curve.

I feel the team we have now is perfect. We’ve got the players and the manager to go and do something special.

“When I first signed, I said I wanted to win trophies and I want to do that here before my time is up.

“To finish above Arsenal would be fantastic, but we’re not worried about them.”

Tottenham are currently priced at 11.00 to win the Europa League, while they are well fancied to win the FA Cup at odds of 4.50.