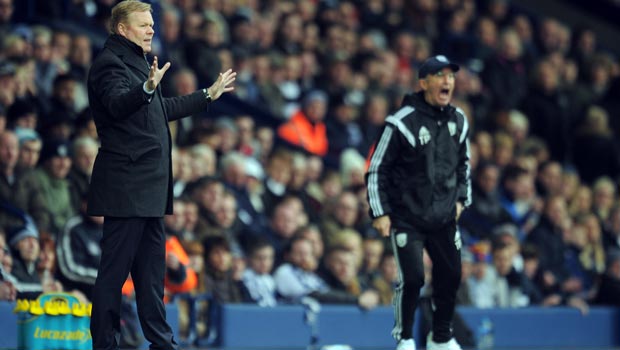 Southampton boss Ronald Koeman is confident that his side can qualify for the Champions League courtesy of a top-four Premier League finish despite their slump in form.

The Saints have been the surprise package in the league this season as they were tipped for relegation before a ball was kicked last summer after boss Mauricio Pochettino left to take over the Tottenham job.

The Argentinian’s departure was followed by a mass exodus of key players with the likes of Rickie Lambert, Adam Lallana, Luke Shaw, Dejan Lovren and Callum Chambers all being sold.

The new faces quickly gelled and the Saints remained in the top-four places for the majority of the campaign until a recent sticky patch with Saturday’s 1-0 defeat at West Brom leaving them without a win in three games and now down in sixth position – four points behind Manchester United in fourth.

But Koeman has spoken out to give his players a target of wins to aim for which he feels will be enough to see them bring Champions League football to the south coast next term.

He told BBC Sport: “Champions League football is still possible if we win seven or eight of 11 matches but it will be difficult. If we win five of 11 games, that means 61 points and we will be playing European football.

“We need to be more ruthless in the box, but it’s not just the strikers, it’s the team who need to create more chances. I need to be clear to the players in what we are trying to do and trying to reach.”

Southampton will look to get back to winnings ways when they host Crystal Palace at St Mary’s on Tuesday night.