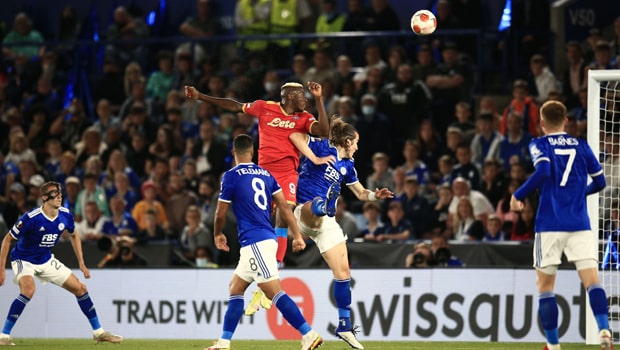 Tottenham could only secure a point in Rennes France when Nuno Espirito-Santo’s side face Stade Rennes in the UEFA Europa Conference League on Thursday evening.

The English side took the lead with a Loic Bade own goal in the 11th minute but Flavien Tait equalised in the 23rd minute.

Gaetan Laborde gave the hosts a lead in the 72nd minute but the lead was short lived as Pierre Emile-Hojbjerg equalised four minutes later.

Neither side could find a winner and Spurs will take a point till they face Slovenian side Mura on the 30th of September.

However, before then, Tottenham has a date with London rivals Chelsea and Arsenal in the Premier League with an EFL cup tie with Wolves inbetween.

Meanwhile, there was no troubles for West Ham United in Zagreb as goals from Michail Antonio and Declan Rice in each half secured a 2-0 win in their opening UEFA Europa League.

Leicester City were on course for a comfortable victory over Italian side Napoli in the Europa League after Ayoze Perez put the Foxes ahead in the ninth minute.

However, Harvey Barnes’ goal in the 64th minute felt like the game winner until the Victor Osimhen’s party started late.

The Nigerian striker lobbed Kasper Schmeicel in the 69th minute before he equalised with a second goal with three minutes left to play.

There was drama as Wilfred Ndidi got sent off in the final minute of the game meaning he will miss Leicester City’s second group game against Legia Warsaw at the end of the month.

Attention will now shift to the Premier League at the weekend for Leicester, and West Ham United as well.